After all the preparation work which went into the Lavaredo Ultra Trail only a few weeks ago, most of what I needed to pack was still in my luggage or put through the washing and waiting for the next race. All that was really needed was for me to go through the kit checklist, make sure I had everything and do one final pack, along with making a few things to eat during the race.

After a long day travelling, leaving London on yet another delayed British Airways flight, I finally arrived in Grindelwald at around 22:30 and made my way from the town centre down the slope to the hotel I was staying at. The journey from Basel to Grindelwald was picturesque and seeing the sun set on the horizon as the InterCity train dipped along the shoreline of the Thune See was something quite ethereal.

Having not been able to see Grindelwald by daylight, when I pulled open the curtains on Friday morning, I was left speechless. A truly picturesque Alpine town with snow capped mountains in the background. It had snowed the day before, which would make for interesting race conditions!

After breakfast, where I met another runner who would be taking part in the E101, I headed up to the sports centre to collect my bib and other bits of race information before having a wander around town, getting something to eat and deciding I had enough time for a trip up the cog railway to Kleine Scheidegg to take in the views and have a feel for what it would be like up in the mountains, where I’d be spending the next day (and night) running.

The race briefing was at 18:00 and they went through what to expect, plus a few tips for race day and some anecdotes about the Eiger. Whilst it had snowed, there was going to be no need for snow shoes but as it was going to be a sunny day, the snow would be wet.

After a generous helping of pasta for dinner, it was time for one last pack and re-checking I had everything needed for the 03:30 wake up call to be at the start shortly after 04:00, it was time to try and get some precious sleep.

The 03:30 alarm woke me up with a jolt and I got up not remembering having slept. Wiping the sleep from my eyes, I pulled on my kit which I had neatly laid out the night before, ate some yogurt, muesli and a birnenweggen before meeting John, who I had breakfast with the previous morning, and walking up to the start.

600 athletes congregated at the start area after depositing their drop bags for the halfway aid station and making enough time for one last trip to the loo before the long climb up to Grosse Scheidegg. We started in the dark but after about an hour of running we were in the early hours of dawn before the sun rose over the Alps and we turned our head torches off. That first climb to 1,956m took 1:37 but that was mostly due to the congestion on the path, which was mostly single track. 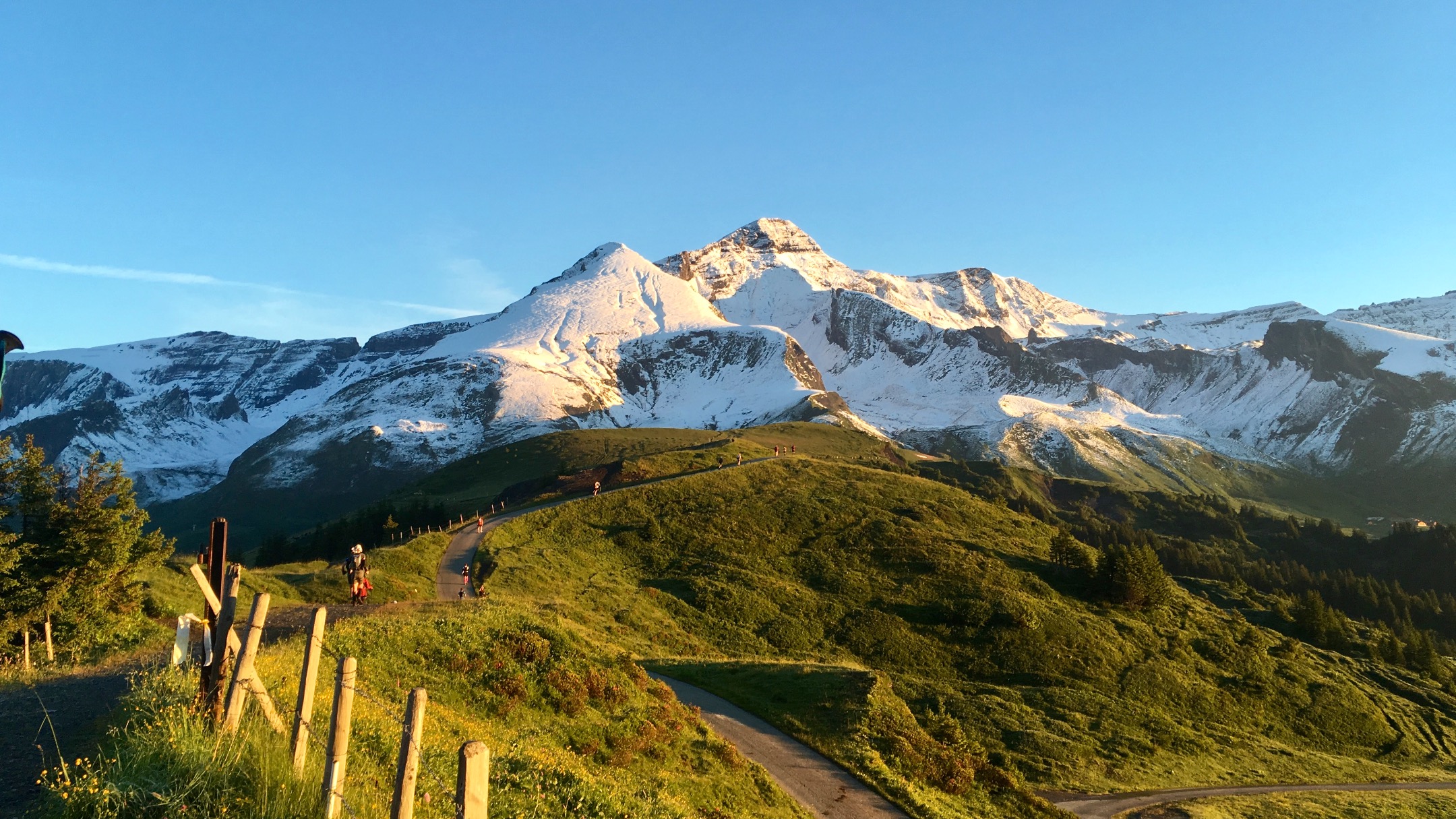 The trail opened up, as we has passed the tree line and it was mostly Alpine heath. The climb eased off to a gentle meaner uphill before the sharp drop to Bort. Shortly after leaving Bort, I took a picture looking towards the mountains. If you looked carefully, you could see First at the top of the mountain. It was going to be a long climb but certainly not the hardest. The track turned away from First, heading left before turning right and the steep climb up the slope. If that weren’t enough, we took the cliff face floating walkway and suspension bridge into the aid station. Pretty spectacular views all around! 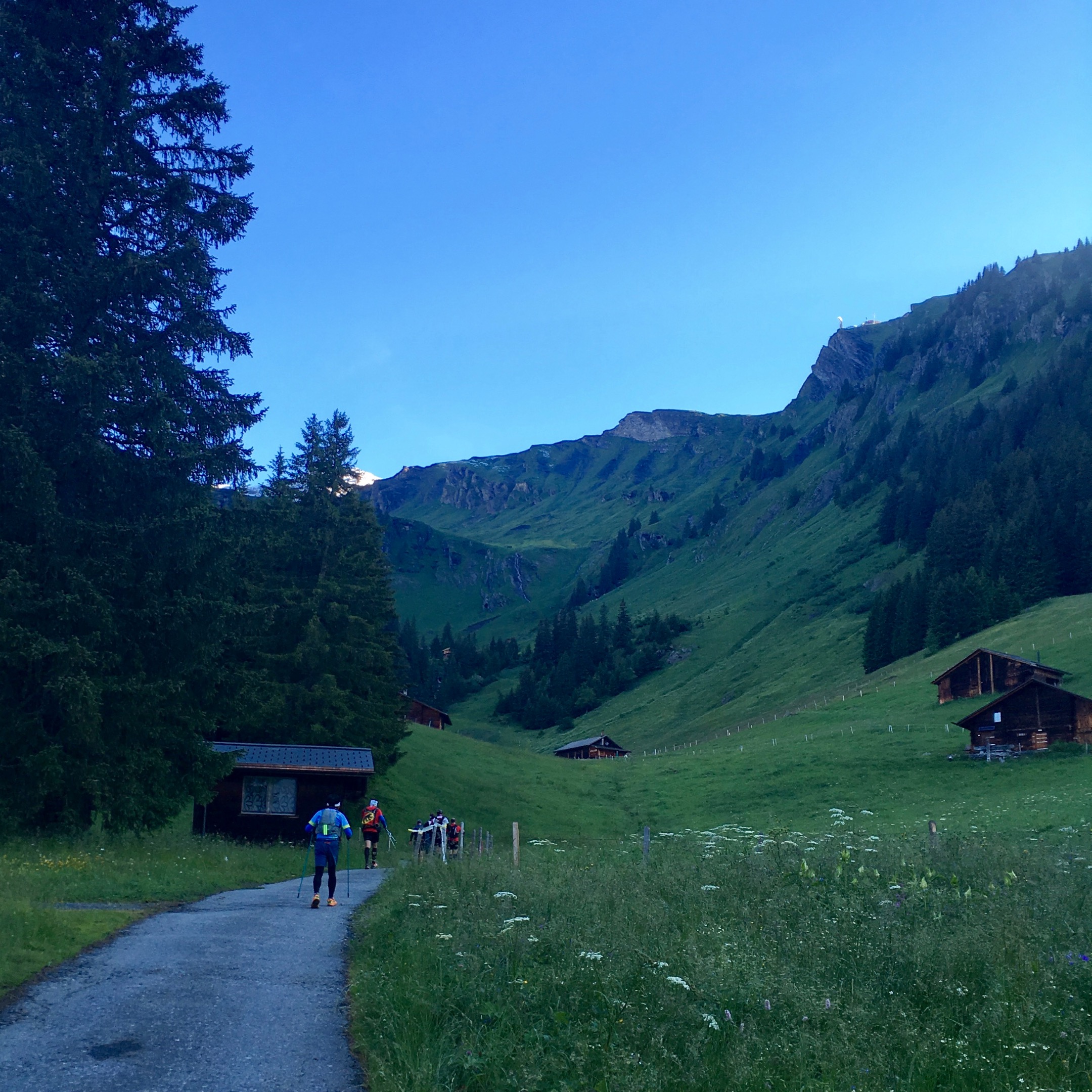 Running along the cliff walk at First

I had some cured meat, cheese, bread, bouillon and banana before heading out the aid station. We climbed a little further before descending to Feld and long hard climb to Faulhorn. The green meadows gave way to snow patches until we were making a trail in the blanket which covered the surrounding area. You really wanted to take in the view but you just had to keep on climbing, as you were stuck in a long chain gang. Reaching the summit of Faulhorn and turning to see where we had come from and looking across the top of the snow capped Alps, I couldn’t help but choke up. The air was thin but crisp. Not even the clouds wanted to be up here. 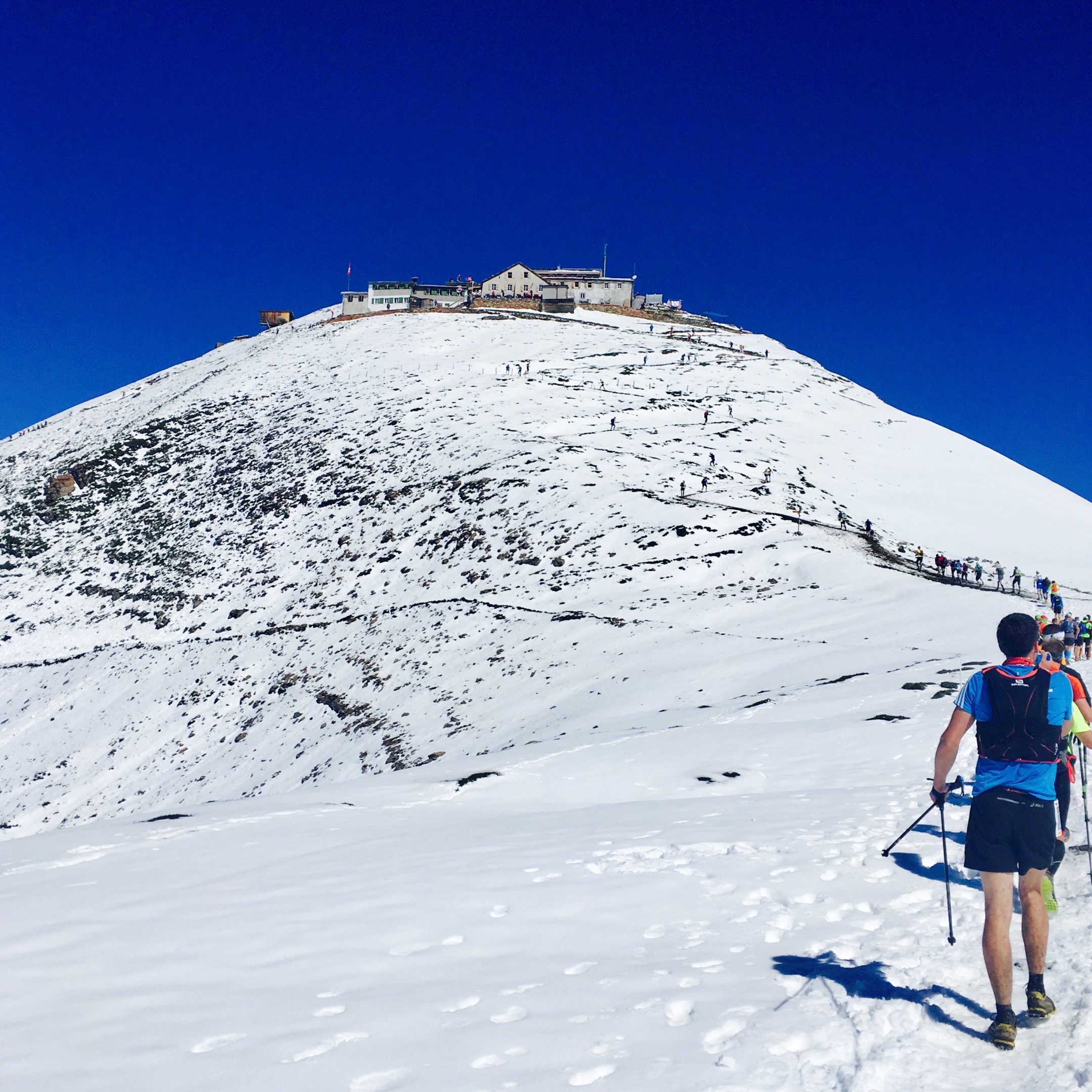 The descent from Faulhorn to Schynige Platte was pretty tricky in places because of the snow and I landed on my arse a few times skiing with my trail shoes and trekking poles. I wasn’t going to do anything stupid when we had a steep drop to the side though… Finally breaking through the snow and rocky area by Schynige Platte, we were on our way down to Burglauenen. Winding our way down the steep slope of Alpine forest and the workers mowing the Alps (yes, they actually mow the Alps!) the race started to feel very different to the climbs up where the air was thin. It wouldn’t feel like this for long though. I arrived at Burglauenen at 15:00, had a decent grazed through pretty much all the food on offer, changed my kit from my drop bag and packed some more snacks for the rest of the journey. 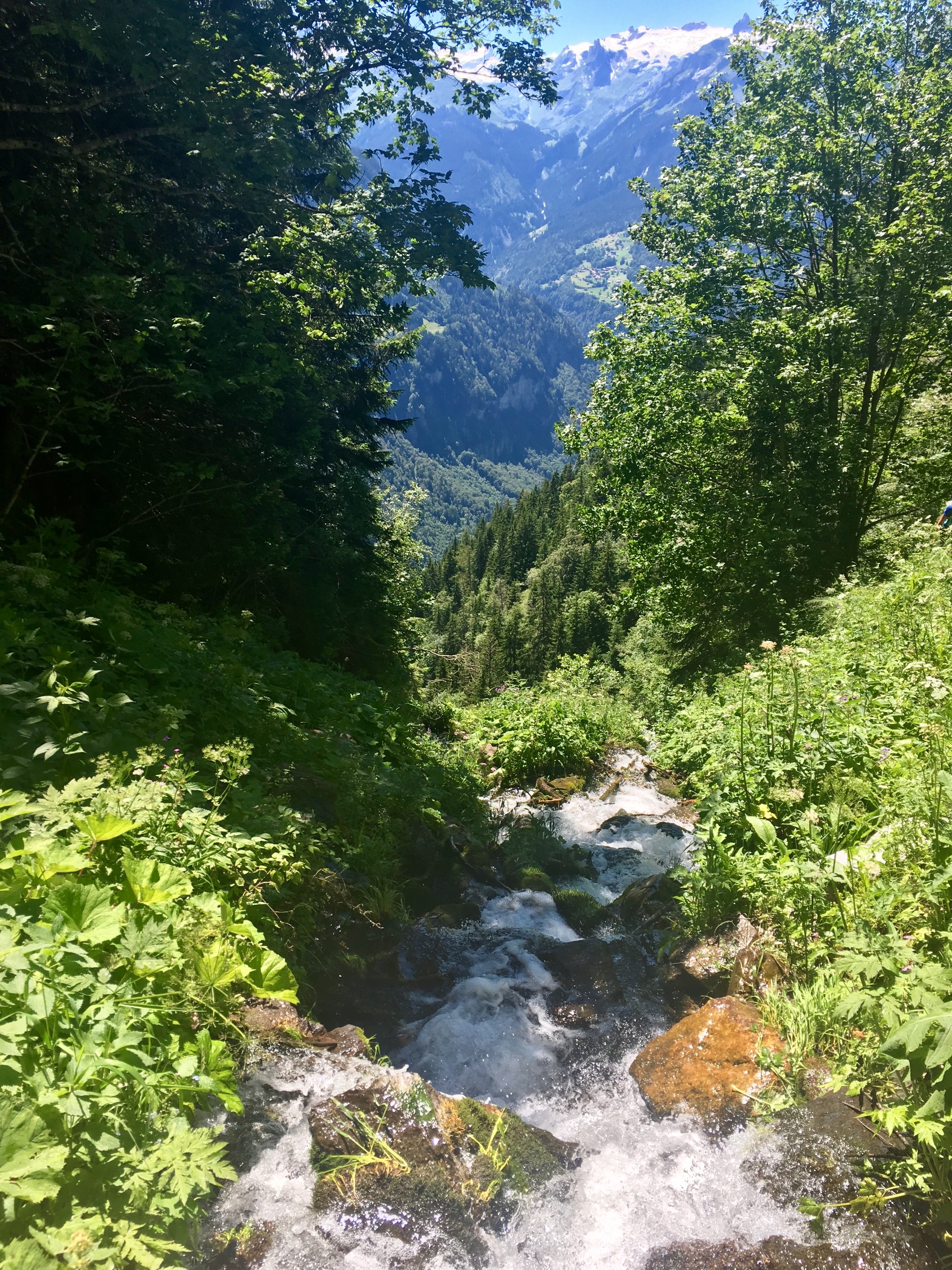 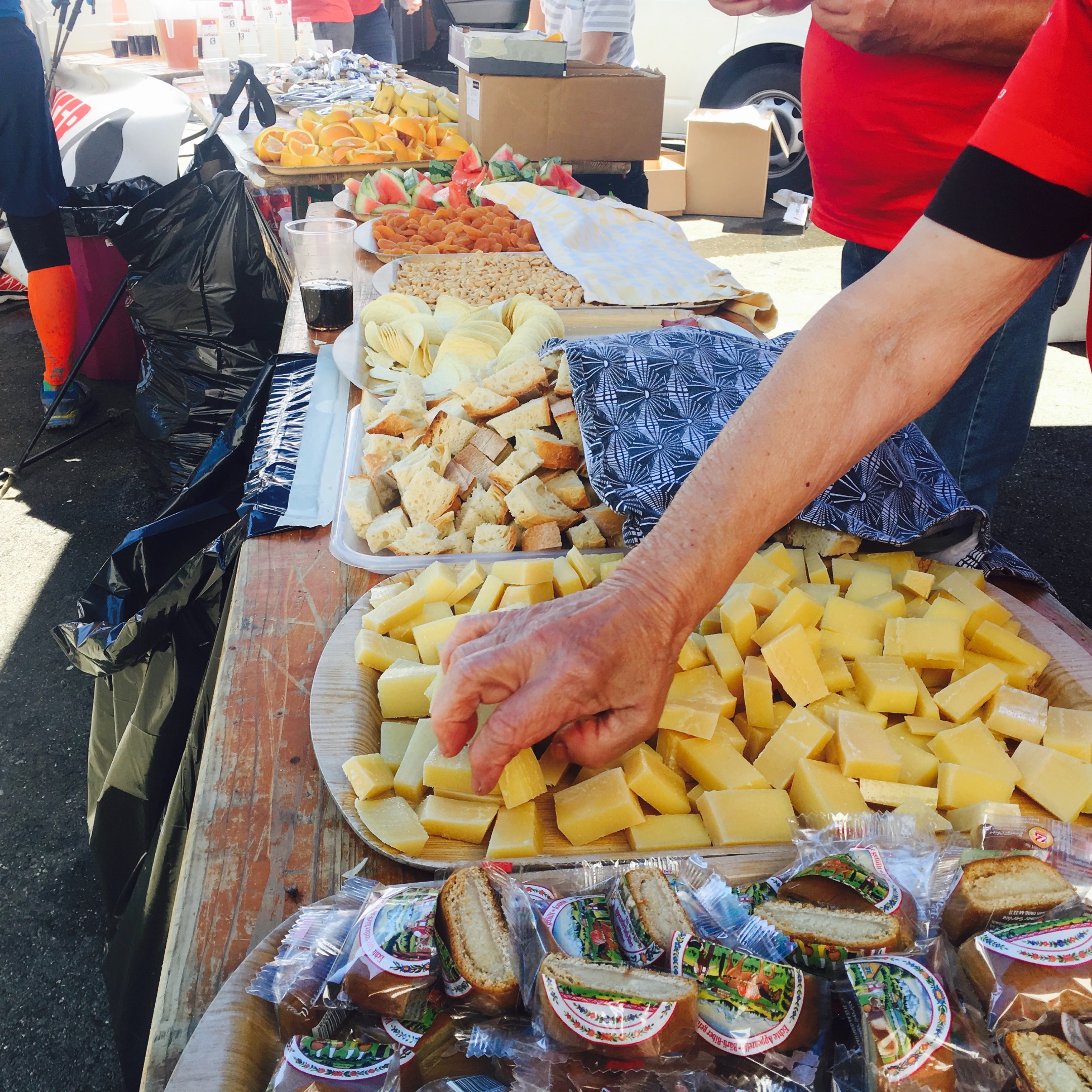 I didn’t rush out of Burglauenen, giving my stomach time to settle. I let myself get stuck behind two athletes for a bit, when I probably should have passed, as I was then stuck behind them all the way to the top of the climb. Anyway, I managed to pass and then relaxed into a nice pace all the way down to Wengen. By this stage it was around 17:30 and it was 18:00 by the time the group I’d pretty much spend the rest of the night with were climbing up to Männlichen. 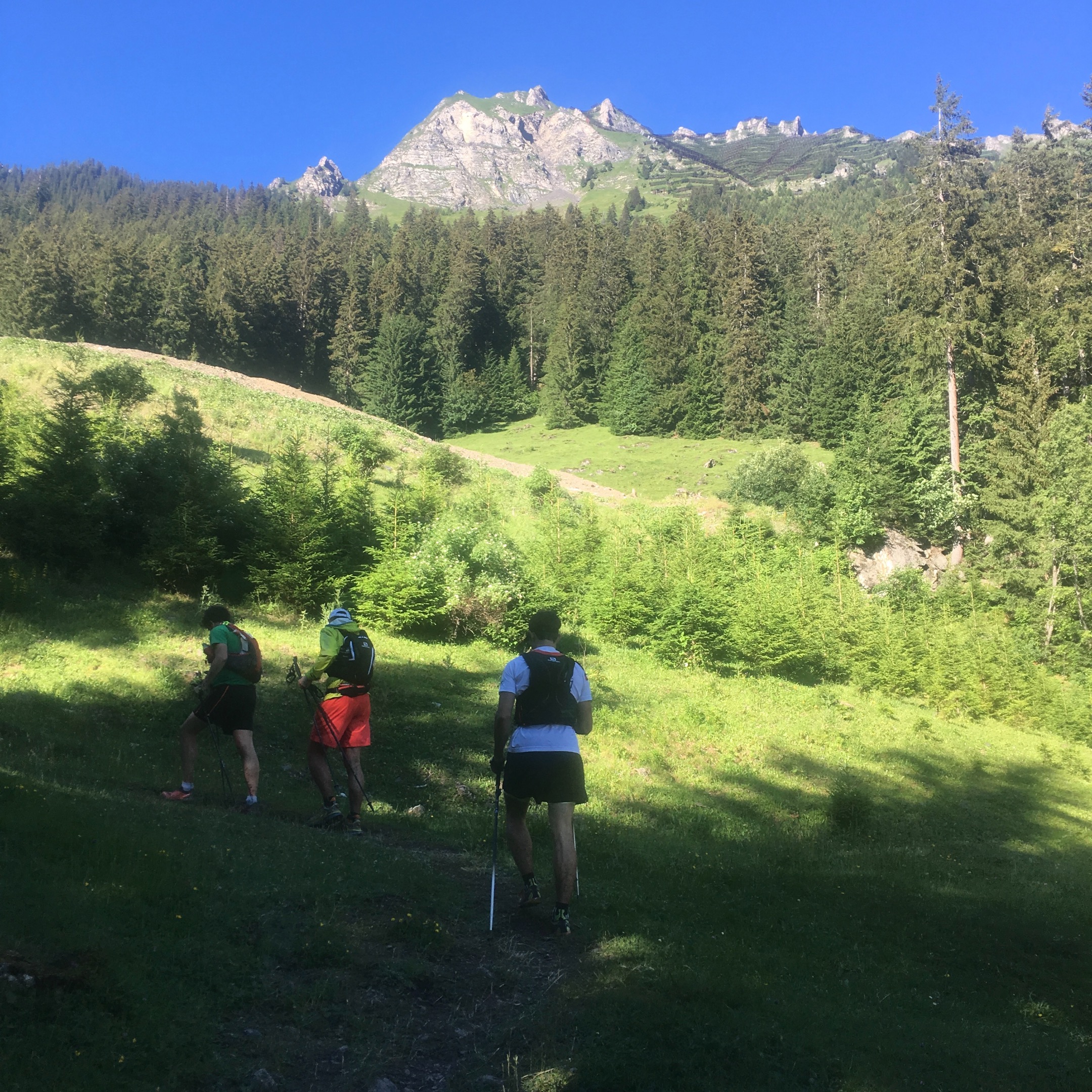 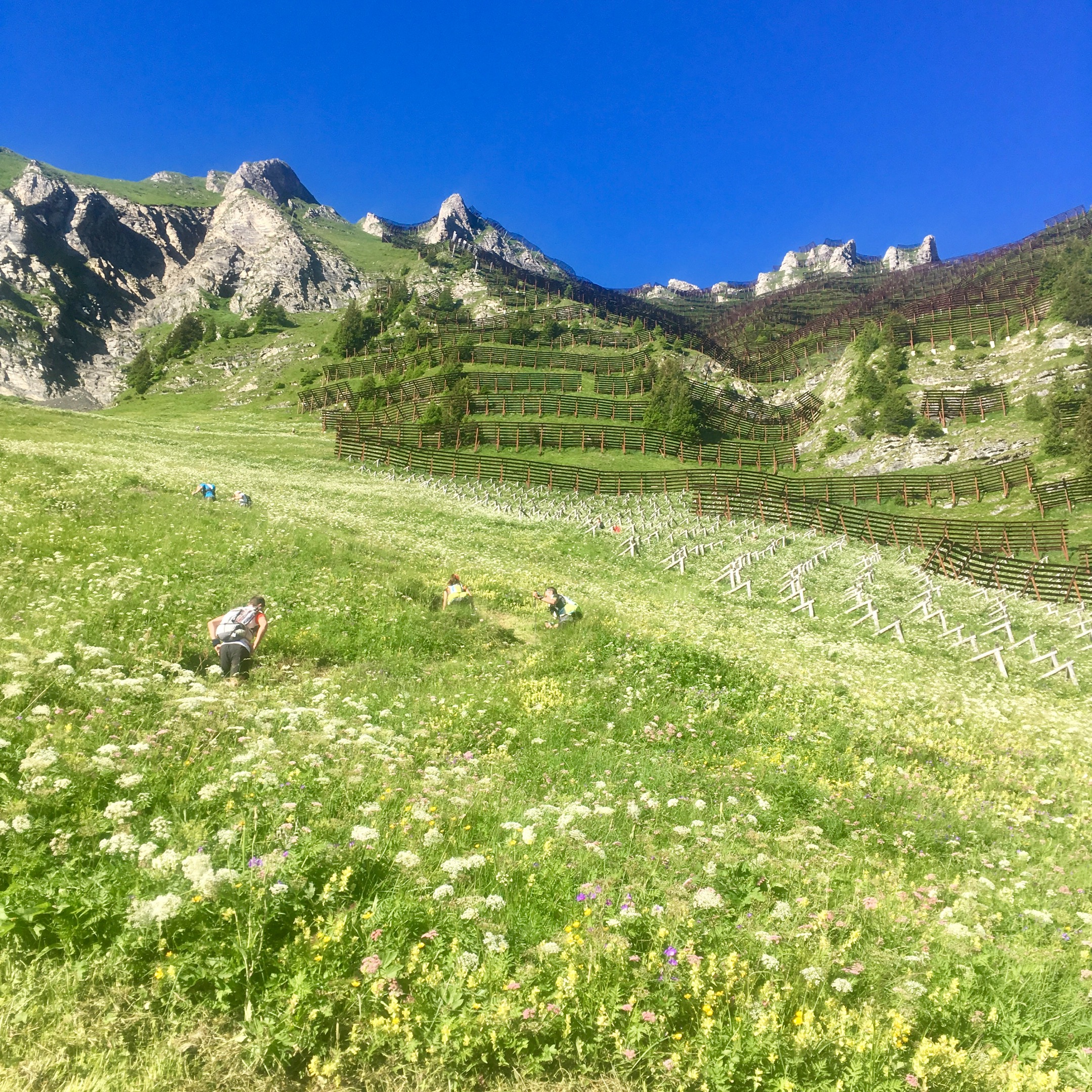 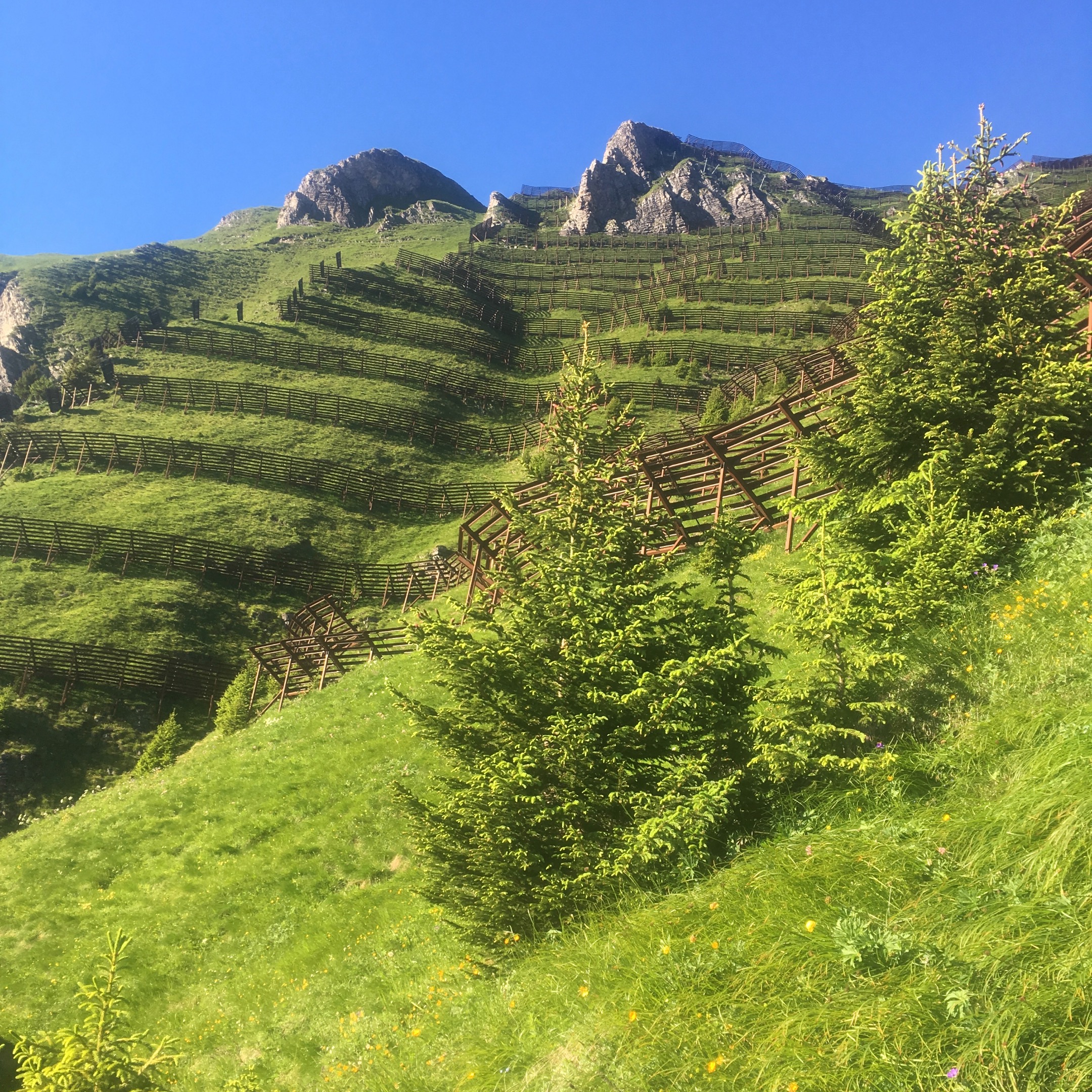 It was one long and tough climb. 1,000m vertical ascent with a racing heart and busting lungs. The altitude had finally taken grip and I was struggling to shake it off. You just keep climbing though, there’s no point in stopping. Seriously, what are you going to do with yourself halfway up a slope?

When I reached Männlichen, it was pretty much a war zone. This was the break point for many people and I witnessed a few people being pulled out the race at this point. The medics were on full alert for any signs that you weren’t ok. I left feeling a little despondent about the climb up to Männlichen but I promised myself I just needed to make it to Kleine Scheidegg. Not far, as the crow flies, but they managed to make a good 10km detour out of it.

Head torches were on by the time we reached Kleine Scheidegg. Was had lost the confidence to continue and had let my mind talk me out of the rest of the race. That climb to Männlichen had completely messed me up. I spoke to a medic who checked my blood oxygen level and heart rate and he said I’m fit and the last two main climbs wouldn’t be a problem.

A sense of hope and belief in myself again and I marched myself out the aid station. We passed through Eigergletscher and were now on the Eiger Trail passing under the North Face of the Eiger. Some lovely rocky trail and the legs were moving. No great pace but we were all moving with a sense of purpose. I didn’t hang around long at Alpiglen, as by now we had only around 15km to go, which at the current pace would take around 3 hours. The sharp drops and steep climbs on weary legs meant we were all in for the long hard slog! 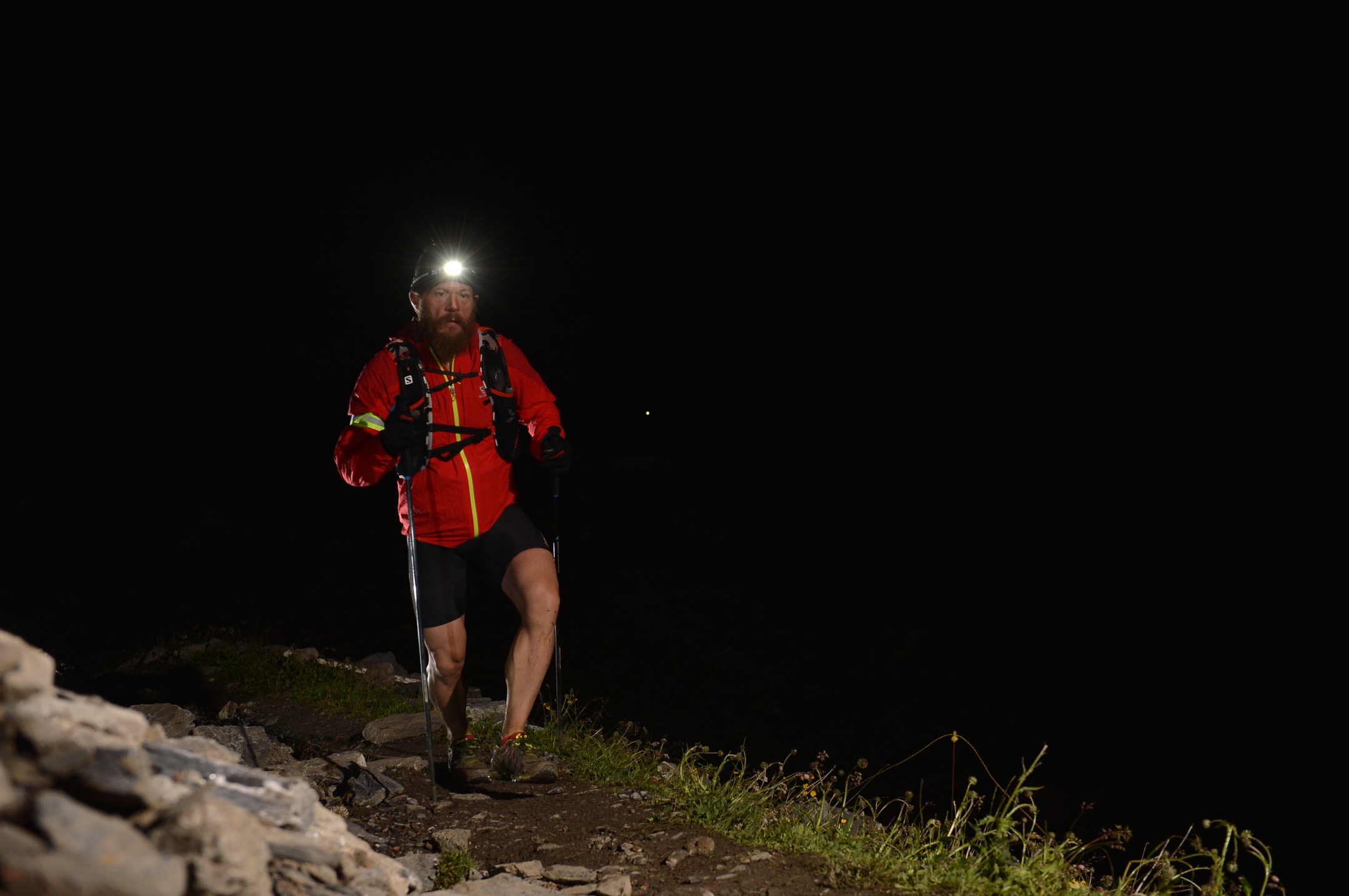 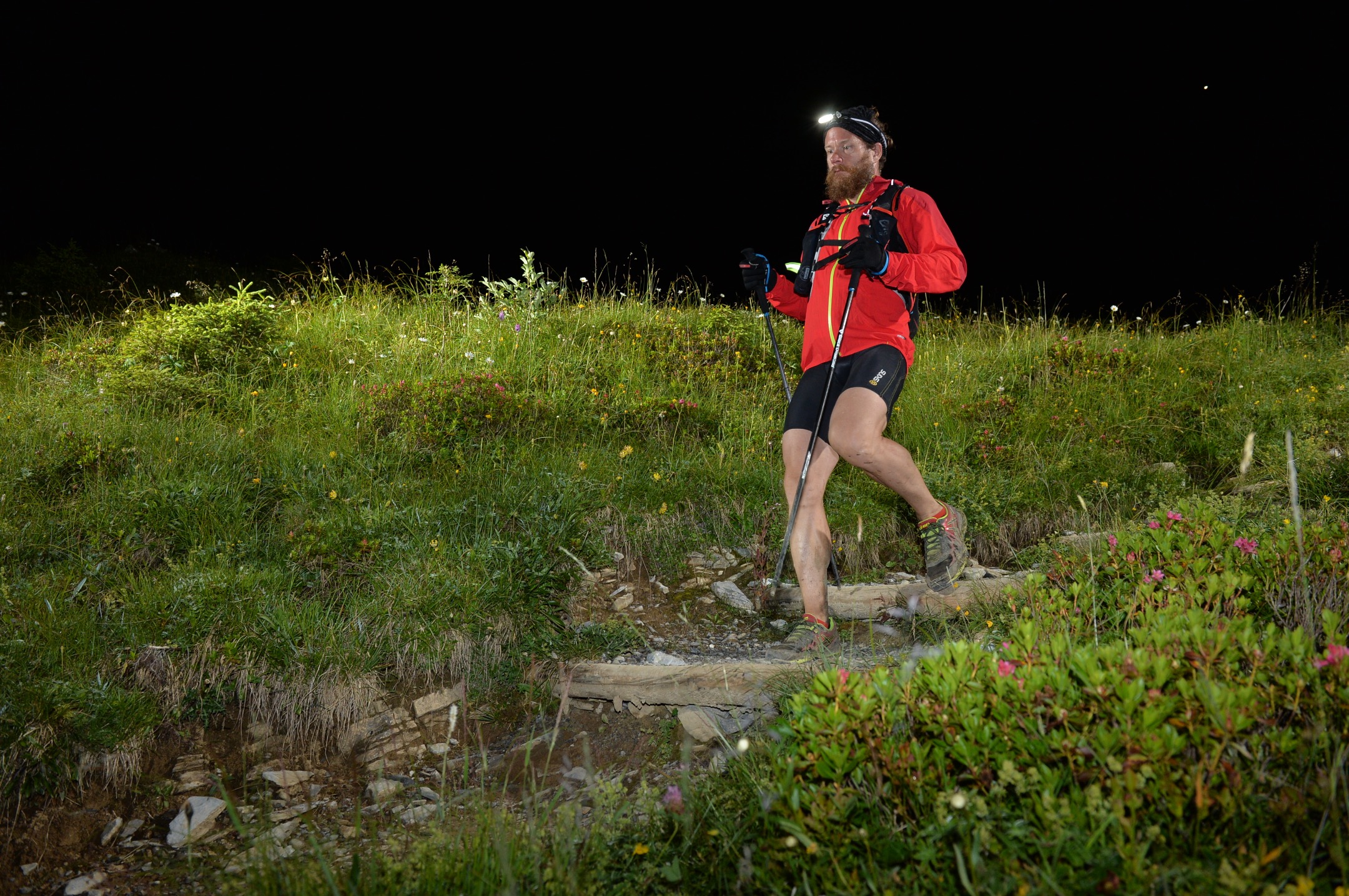 The trail continued with views of Grindelwald and you could see the sports centre where we’d finish. If that wasn’t motivation to keep going, I’m not sure what would be. Those last hours seemed to go on forever. We climbed and dropped, twisted and turned and finally reached Pfingstegg after a mean 300m climb over 2km. All I was thinking about at this stage was that we were going to have to drop down this climb to reach Grindelwald and it was going to hurt my shins like mad.

We left Pfingstegg walking down the slope and I slowly let my pace increase until I was running. The pain didn’t matter at this point. There was only 5km left and I didn’t cherish the thought of it taking an hour when it could just as easily take me 30mins. I kept running and finally crossed the finish line shortly after 03:30. I had been out on the trail for 23 hours. 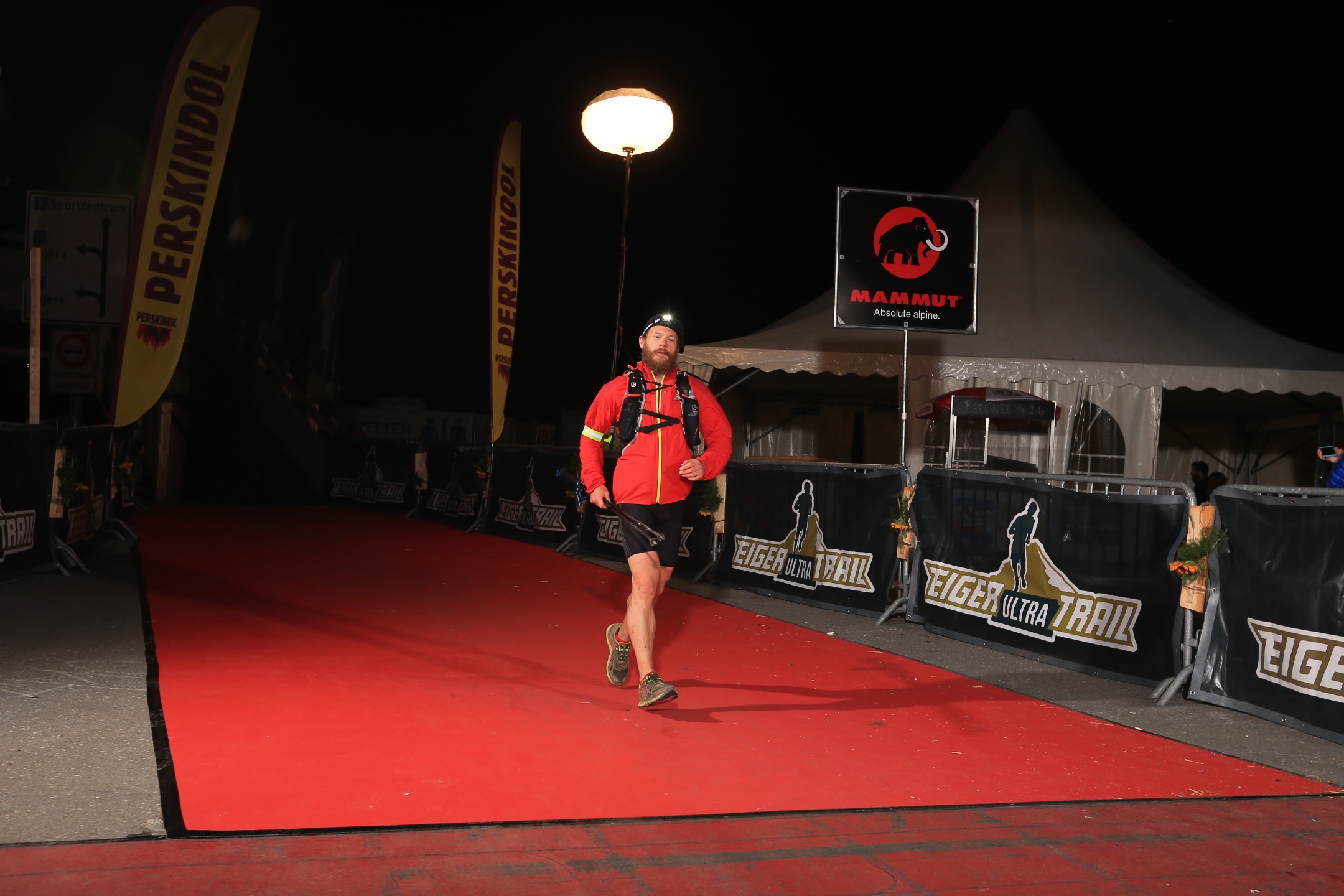 My bed was calling. I was tired but unable to sleep because of my head was still buzzing from the intense concentration, so I started to watch a movie until I switched off. How could I though, I had pushed my body through some difficult moments, an experience which I’ll struggle to beat.