Unchartered territory and no half measures. This was always going to be a test of endurance for the body but had I bitten off more than I can chew and pitted myself against athletes with significant mountain running experience. With time out from fracturing my second metatarsal and making the most of 8 weeks training, it was never going to be easy.

With everything packed on Wednesday evening, including all the food I planned to take with, it was early to bed. My taxi to the airport was collecting me at 04:00. With thunderstorms, the size of which haven’t been seen in London for years, overnight, I had little sleep. Things were not going smoothly with routes to the airport flooded and traffic backed up on the motorway, however I made it to the airport in good time. Then there were queues at security with everyone trying to make their flights, none of which were leaving anytime soon, with air traffic being routed via Brussels.

Missing a connecting bus to Cortina d’Ampezzo from Venice Airport, I decided to make the best of a bad situation and took a bus to Venice and wandered around there for the afternoon whilst waiting for an alternative bus later that day.

Arriving in Cortina around 20:00, I took the short walk to my hotel, had dinner and unpacked my kit, so it was ready for inspection when I collected my bib in the morning.

The race was starting Friday evening at 23:00, so I spent the day taking it easy, rechecking my kit and a making a few last minute adjustments. The weather which had passed over London on Thursday had finally arrived in the early evening. The flash of lightning, the almighty crack of thunder and then the heavens opened. The rain had eased off by the time I headed to the start line and 10 minutes before the start it had dried out.

We counted down and then we were off! The whole town was out shouting support through the streets and at various stages along the way until we hit the trail. With a bottleneck and only being able to go as fast as the person in front of you and not wanting to slow down the person behind, the pace had been decided. It was a steady 500m climb over roughly 5km which I managed to power up before the descent which was incredibly steep and tough on the legs. The pace was quick and it was no time to make an error, especially at night, with only the pool of light from your head torch guiding you.

The terrain eased off for a bit before another climb, this time a little more forgiving on the legs, taking us to Ospitale, where we refilled our water bottles and had a quick snack. Those first 15km had taken roughly 2 hours. This was only the start.

The supporters through the night were fantastic. Dotted along the path at openings near roads ringing cowbells and at other points there were marshals directing us, so that nobody managed to get themselves lost missing a critical turn.

03:30 and I arrived at Federavecchia, roughly 34km into the race. We had come down some steep slopes after another climb out of Ospitale but the steep climb was yet to come. We climbed another 500m before a nice gentle drop into Misurina, along a rather muddy path, which I managed to sink half my leg into as my trekking pole disappeared into the earth ahead of me.

By now it was around 05:30 and head torches were going off as we cleared the forest and caught a glimpse of the Lago di Misurina. It took another two hours to climb up to Rifgio Auronzo at around 2,400m. We were still climbing.

The gradient eased off and eventually tipped the balance to go downhill, something you’d be relieved to see after climbing for such a long time but we were due to drop 1,000m over a space of 8km. Nothing could prepare you legs for what they were about to endure. The descent was brutal, zig-zagging down a never ending slope, easing off before dropping again and again before a gentle climb to Cimabanche. 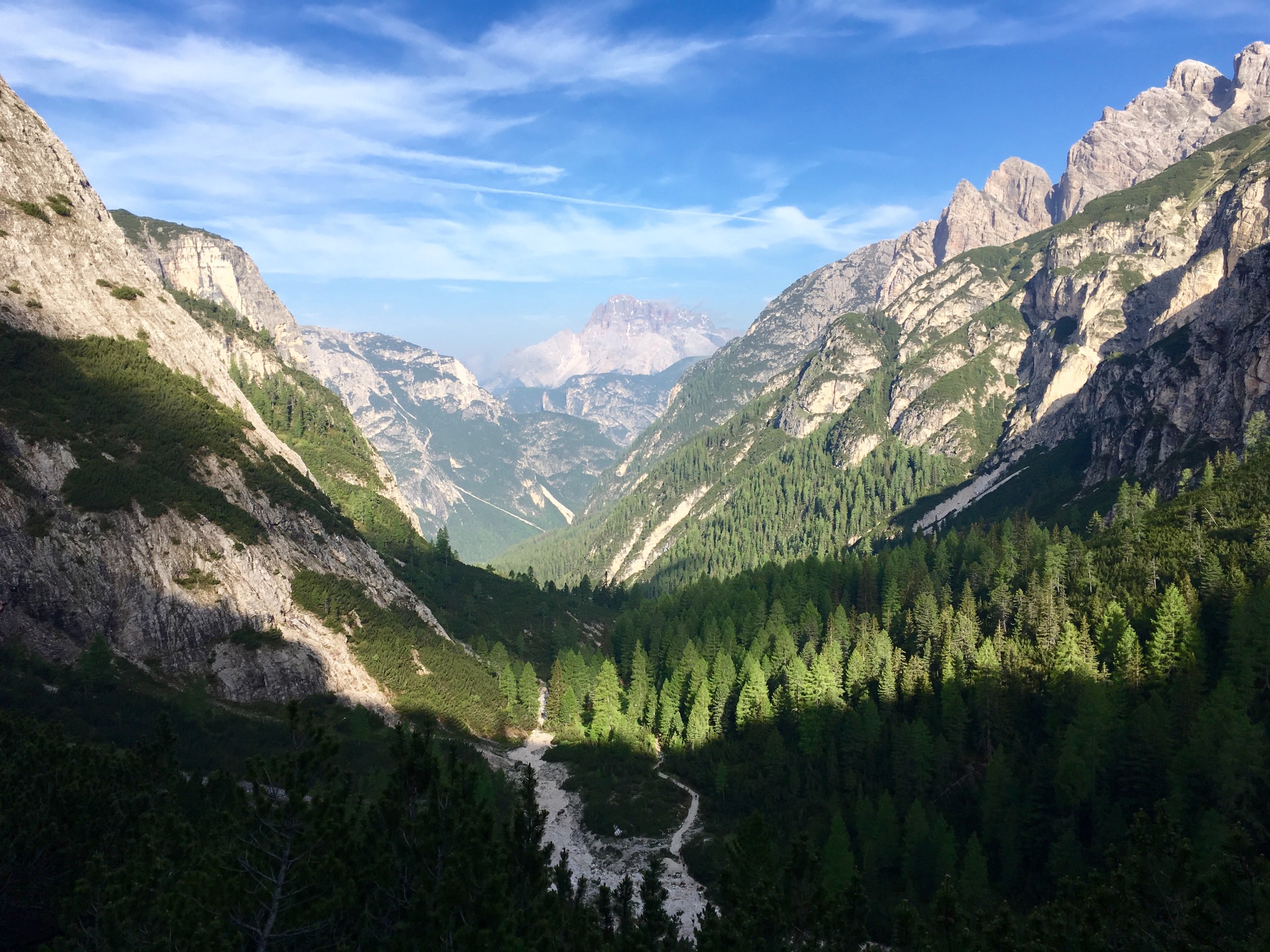 Arriving at Cimabanche was a relief. My body needed some pampering. A change of clothes meant the world to me, as did a snack whilst sitting in the grass, bathed in morning sun at around 10:30. Things were going well but the descent from Tre Cime di Lavaredo had taken its toll on my legs and my shins were in agony.

I was not ready to give in, so soldiered onwards to Malga Ra Stua. The terrain had changed from rocky slopes to alpine forest with a pungent smell of pine rising from the forest floor. I didn’t hang around long and after filling my water bottles, I was heading up towards Tofana, the graceful mountain range which towers over Cortina d’Ampezzo.

We were about to embark on climbing another 1,000m and the temperature was about to peak at 30°C. I wasn’t prepared for the sun, as the weather prediction indicated it would be overcast, not clear blue skies with the sun baking you on exposed slopes. I was relieved when some clouds started to pull over and there was another rumble of thunder in the distance. Along with it came a drop in temperature to 19°C and wind chill, exposed high up on the mountain.

The path leading to Tofana and Forcella Col dei Bos started to become particularly tricky, with steep slopes, not only ahead but either side of the path, which had worn away in places. This was no place to to be suffering from sleep deprivation or lack of energy.

Out of nowhere I started to feel nauseous and disorientated, so I stopped. Another athlete passed who’s legs had all but given in and had fallen earlier. He encouraged me to walk a bit. I said I’d catch up in a bit. We started to leapfrog each other, keeping check that neither of us were in trouble.

After about 17 hours on the trail my body decided to reboot. I found a spot in the grass, had a nut butter cookie and some electrolyte drink and shut my eyes, for what felt like a moment. 20mins later I shot up like a marionette puppet, wide eyed and alert. Unfortunately my body was still letting me down and those awful shin splints would plague me all the way down to Rifugio Col Gallina. 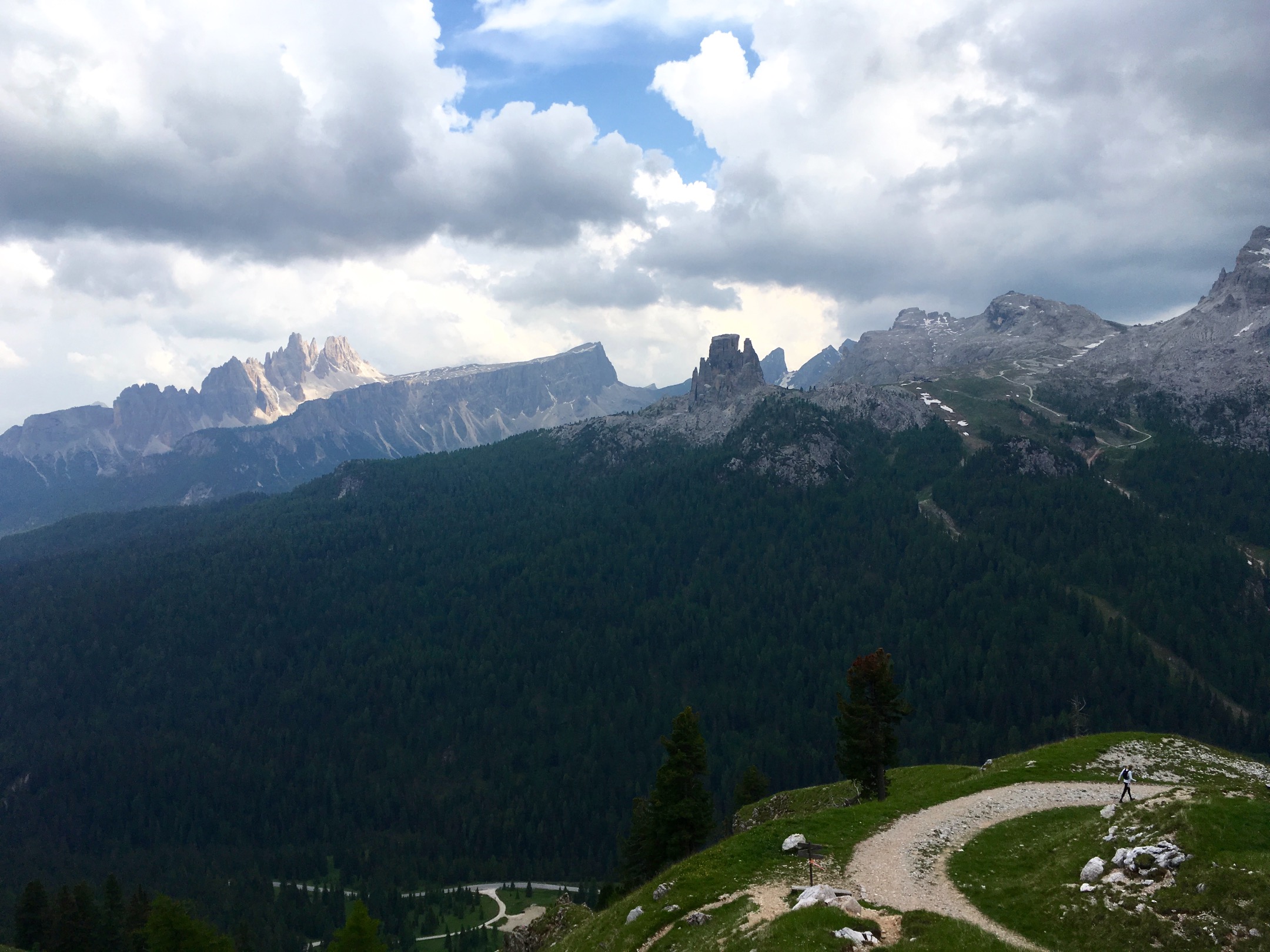 The walk down the mountain seemingly took forever. I couldn’t truly appreciate the view from the track which swept all the way around and down the slope. I think I didn’t want to take a picture of it because I didn’t like what it represented to me at that point. Pain and suffering which few people would be willing to undertake. Yet there I was, not complaining, only wishing I was able to lift my body out of the slump it had landed itself in.

The internal dialogue I had with myself over the last two hours meant I was not going to be upset with what I was about to do. I had past the “fuck this shit” stage. Given up ultra running and mountaineering. But there I was still marching forward because that’s what you do.

I reached Rifugio Col Gallina, had something to eat and withdrew from the race. Whilst I knew I could probably manage the next 10km, there was no way I would be able to cope going down Croda da Lago.

Not doing anything in half measures, this was a true baptism of fire. I don’t for one minute think I had bitten off more than I can chew and if anything, I’m more determined than ever to return next year. Not only is there unfinished business, there’s crossing the finish line, which will mean even more after giving everything I had this time around.