They say you run the first part of a marathon with your body, the next with your mind and the last with your heart. If you’re looking for a way to rationalise the race, I suppose that would be it. There’s so much more to it once you scratch the surface though.

Berlin would be no exception. Recent focus on running changed to a “less is more” approach, with me only running 3 to 4 times a week and cross training and getting in some quality gym time on the other days. As marathon day started to get closer and closer I began to worry more about the lack of running but my training plan focussed more on quality sessions.

With a week to go to race day, I decided to do a bigger than usual legs workout with a friend, something my coach wasn’t entirely happy about and left me feeling like I had been firmly sat on the naughty step in the final days. If there’s ever anything you shouldn’t do in your taper, it’s go off plan.

After flying out late Friday evening and settling in at my hotel, I woke on Saturday morning to have a final stretch of the legs before a hearty breakfast and making my way to Tempelhof to collect my bib at the expo. It was extremely busy, so I didn’t hang about and left for a wander along Kurfürstendamm to check out a few shops, have a bite to eat, then head over to Tiergarten to watch the inline skaters pass through the Brandenburg Gates. It was nice to spectate for a change, not something I get to do often. 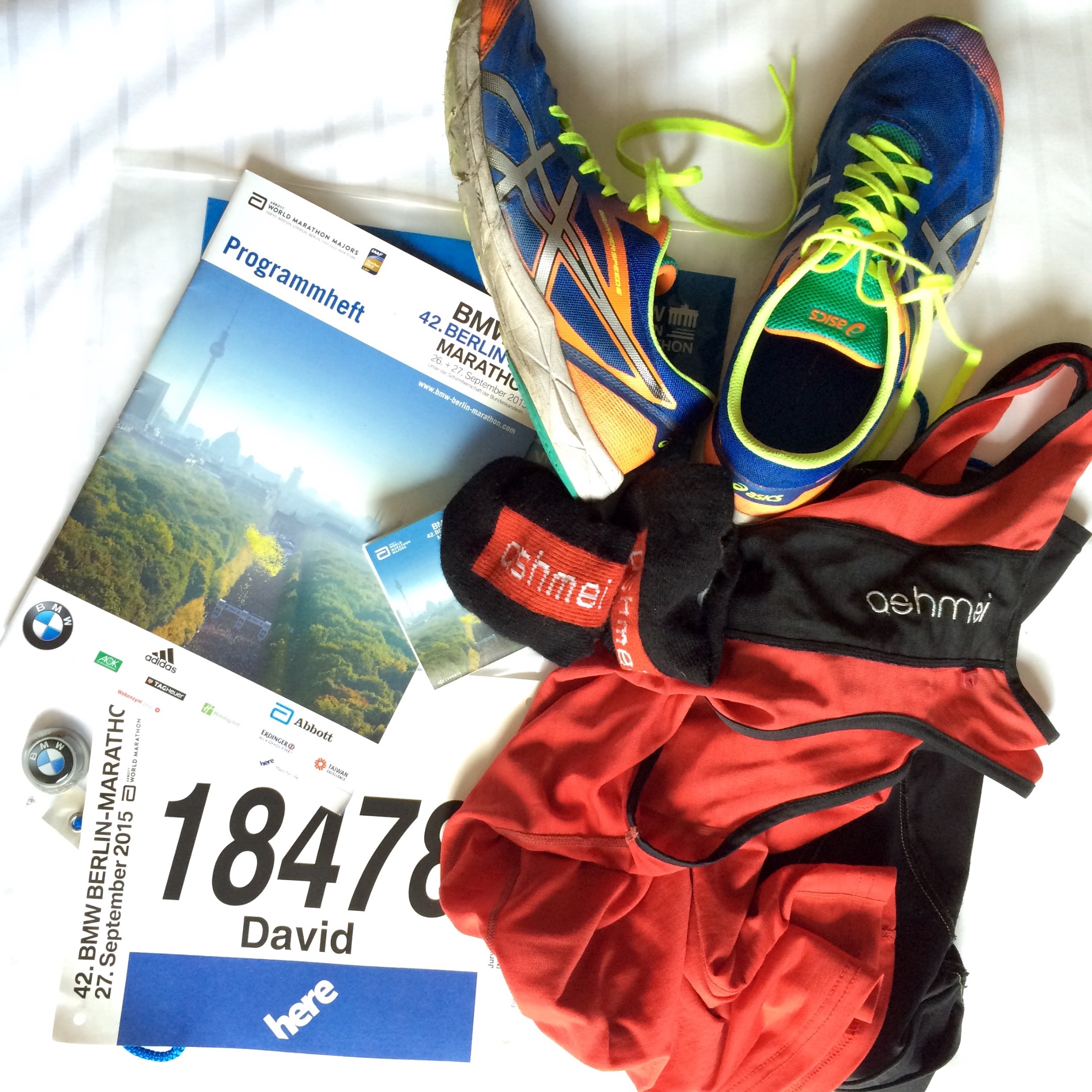 Race routine then kicked in. The ritual of laying everything out for the next morning, packing bags and the safe dinner of pasta with a tomato based sauce washed down with a non-alcoholic beer before heading to bed by 10pm. Then laying there unable to sleep due to excitement, nerves and a bit of fear but too tired to read.

The alarm goes off, I jump out of bed and straight into my race kit, put my jacket on and grab some breakfast. There’s no hunger but I manage two cups of coffee, boiled eggs and a roll with cheese. That’ll do.

The trip to the start doesn’t take long but I’m glad I factor in a spare 15mins to play as the queue for toilets is long. Then I spot another set on the far side of my starting pen which seems to be moving quicker. Perfect! 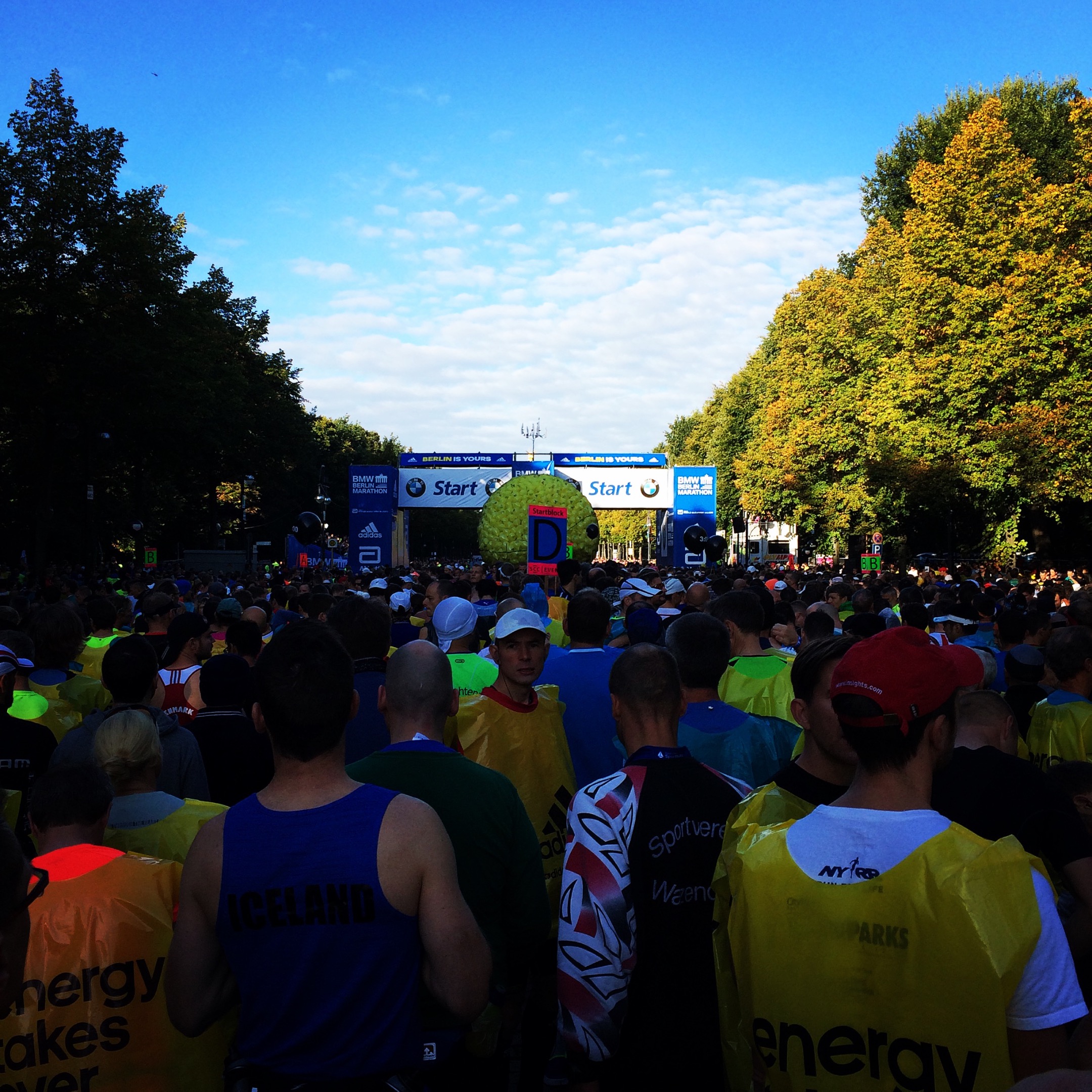 The atmosphere is really starting to build now. There’s only 15 minutes to the start and the wheelchair and handbike competitors have already left. The pro elite athletes are announced; the Mutai’s, Kipchoge for the men’s, Kebede, Cherono and Hailu for the women’s.

These final moments pass quick and before you know it, we’re moving forward. The walk becomes brisk, we all break into a trot and cross the start breaking into full flight. Berlin is a fast course, only held back by the fact that it’s so damn busy when all you want to do is break free. Maybe this is a good thing, as when I check my pace for one of the 42 times over the course of the marathon, it says I’m breaking into 3:50/km territory, so I decide to let it pass to the more familiar feel of around 4:10/km.

The first 5km seem to fly by and I remember wishing it always felt as good as it did then. At around 7km I caught a glimpse of the Reichstag. I didn’t remember that we run so close to the Tiergarten and event area. I can spot the Fernsehturm, so we’re near Alexanderplatz. We stop heading East and now start heading in a Southerly direction, then heading West when we reach Hermannplatz. 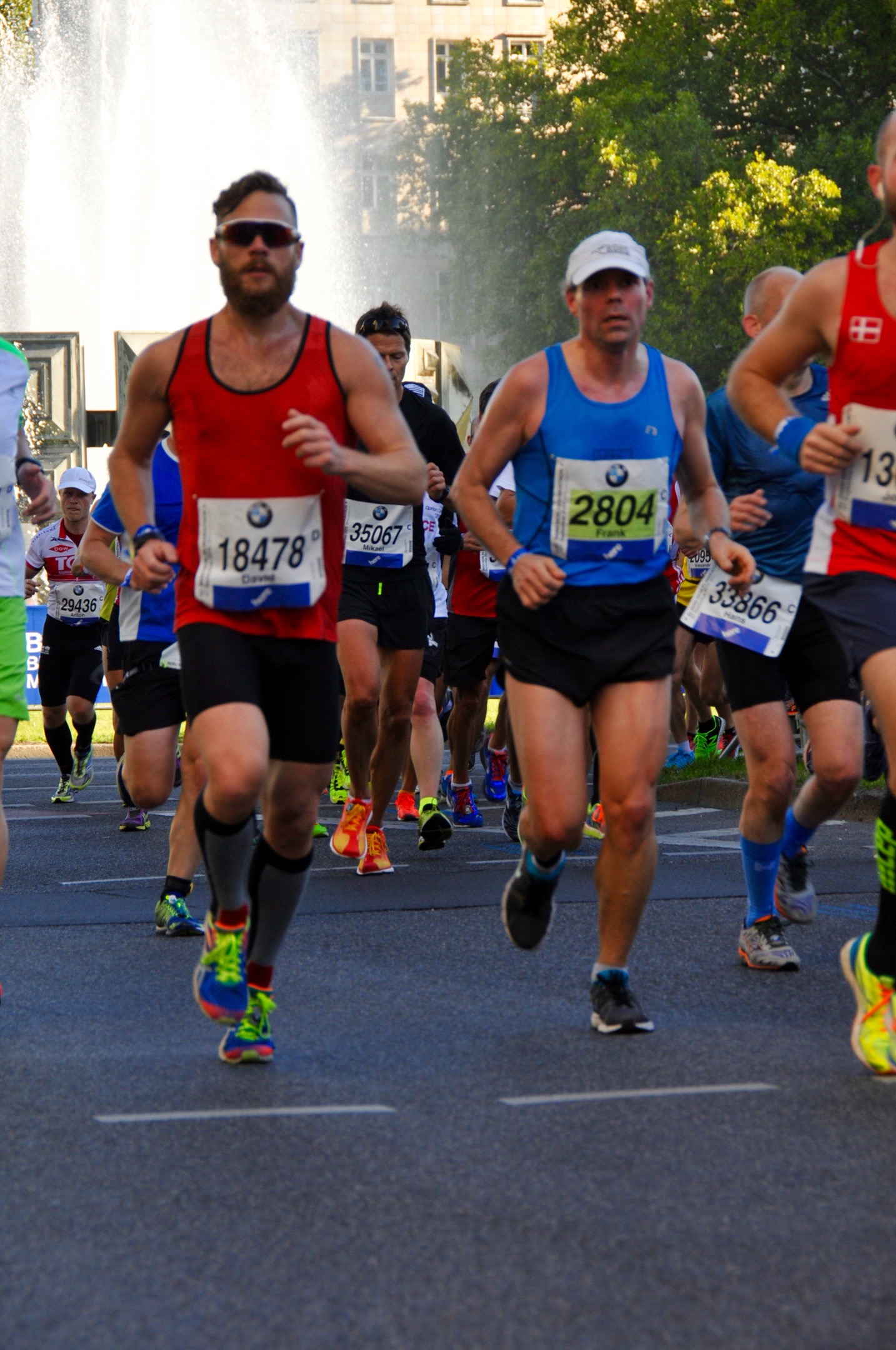 The cramped feeling of being on top of each other has eased off now that we are approaching the half marathon mark and I check my splits to see how things are going. Doing some calculations in my head (I find myself doing this a lot during a marathon) I give myself a predicted finish of around 2:58 if I keep a comfortable pace. I made good progress in the first half and know I’ll burn in the second but it’s important not to burn out, especially as I find my body sending me regular signals for carbohydrates.

I have spent much of the first half playing cat and mouse with a group of Danish athletes. I think I’ve shaken them off, at least for a bit, until one of them pops back into my sight. I sense some frustration, not at them but at myself. I start beating myself up that I’m not good enough and need to do better. I focus on taking them down one by one again. Right, time to move on to the next. Him over there (50m ahead)… he’s my next target.

I’m not sure how long I’m playing this game but it passes the time to 28km. I check my watch again, calculate my splits, project my finish time, which is still around 2:58 so it’s looking good. I find myself running around the same familiar group of people now. This last hour is when you just stick to it and don’t do anything stupid. 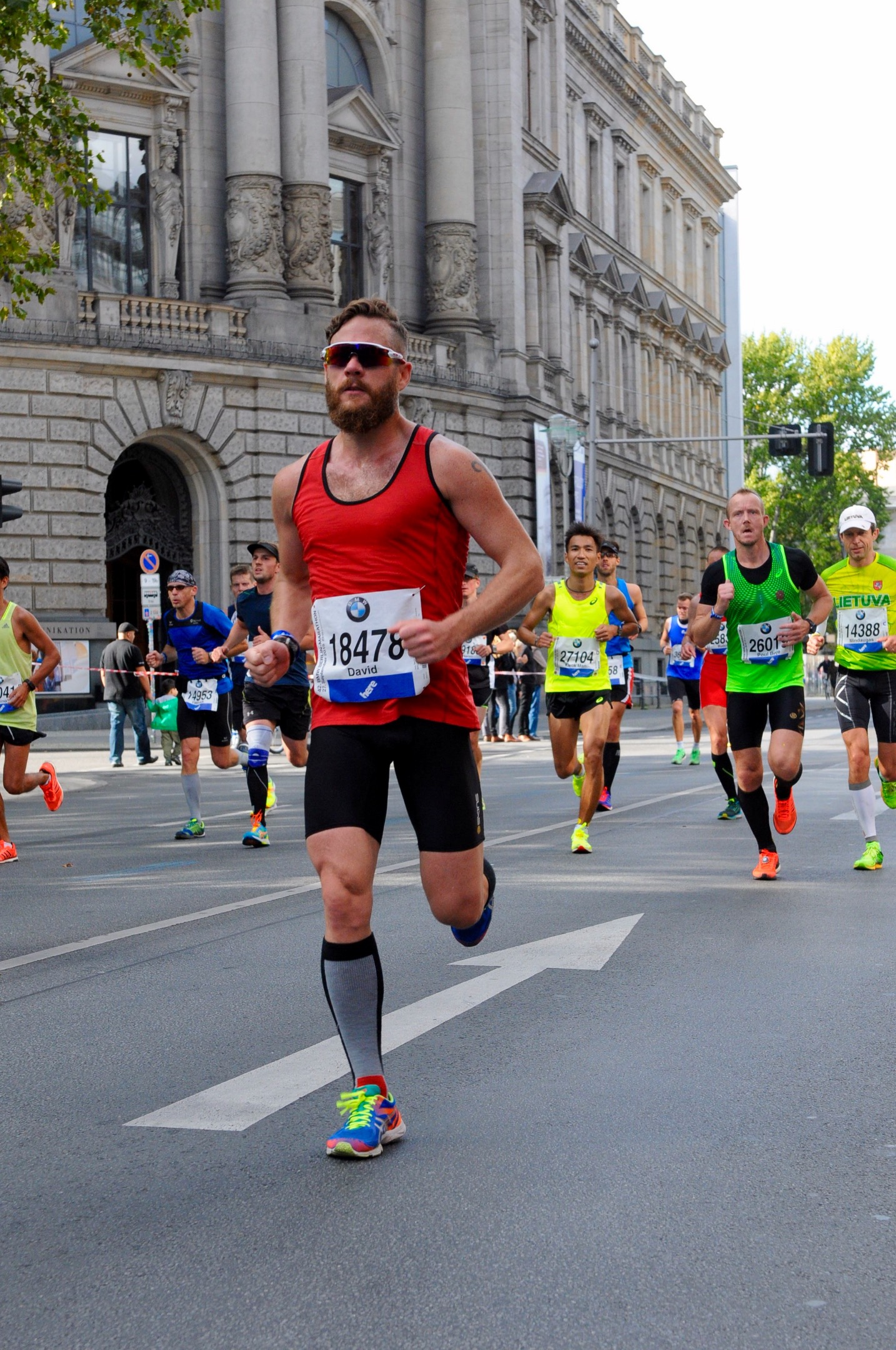 I hear a voice behind me shouting “30km now the marathon starts”. It’s the pacers with 3h00 balloons bobbing behind them. I passed them some time ago but those pacers weren’t letting anyone around them have it easy. In broken English the other says “we going sub-3”. Best I stick with them then.

By now we’re passing through Wilmersdorf and onto Kurfürstendamm. There’s a roar from the crowd as they see us come around the bend. We can even hear the commentator saying we’re going to finish sub-3 hours.

There’s only 7km left. My legs are burning now. My feet have been feeling a little raw for the past 5km but it’s ok. You stop thinking about how long, how fast, whether you’re going to make it in the time you wanted or not, you just run. This is running because you want to, your body says slow down just a little, your mind says it’s been a good day and that’s good enough. Something else kicks in. 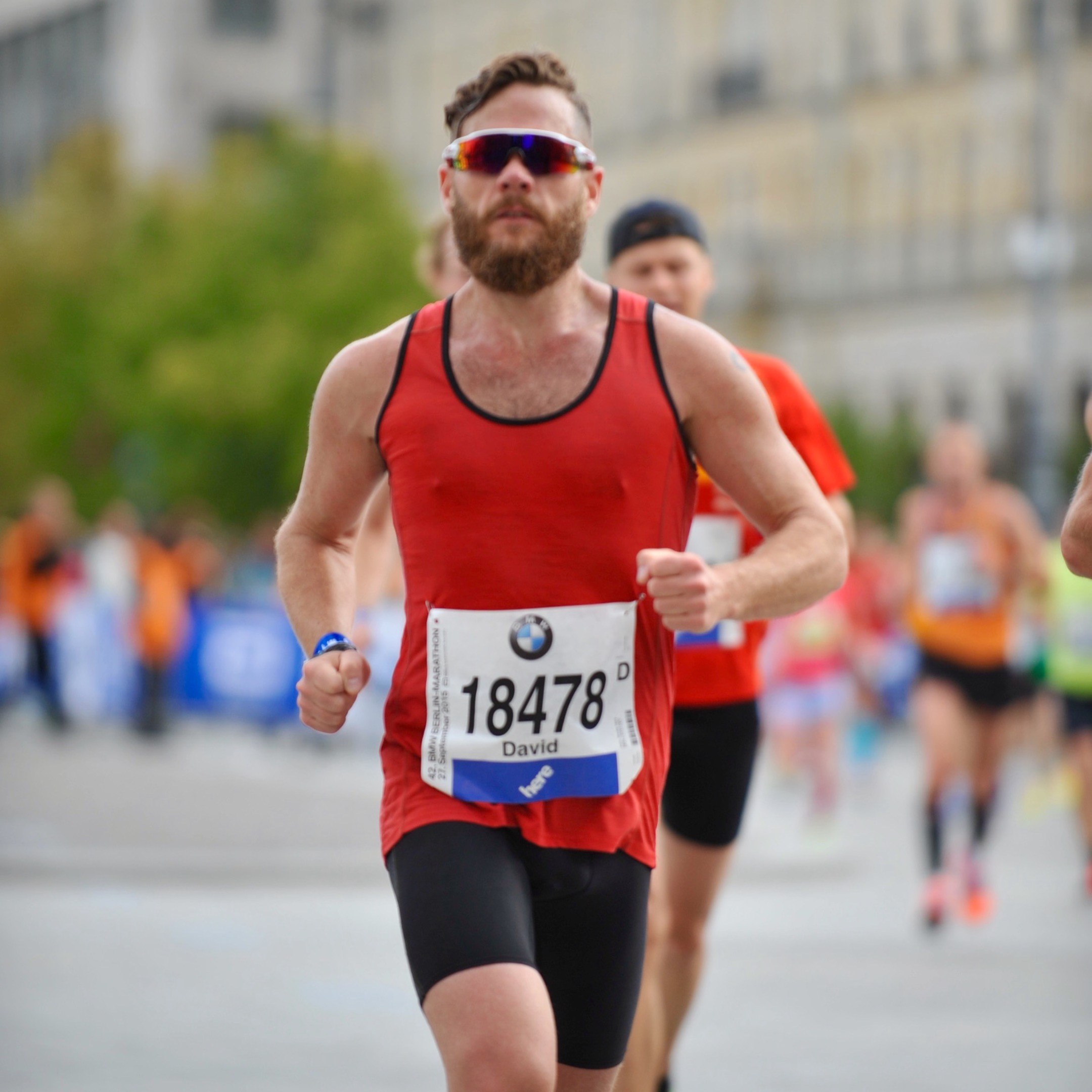 It’s this moment that I run for. Against all odds I’m drawn like a moth to the flame. There’s nothing else which fills my mind at this point. I can sense the sweetness that is crossing the finish line. I remember zigzagging through Mitte and eventually caught sight of the Brandenburg Gate. The crowds were cheering, the commentator shouting “You’ve done it. Sub-3 hours”. The concentration seems intense. Just how long have I been completely focussed like this?

We hit the blue mat of the finish chute and I see the time 2:59:32. I know it took me little over a minute to cross the start line, so I’m still good for 2:58. There’s a moment my mind is clear of all thought and then my inner voice says “Right, we’re done. That was a good day David, you should be proud.” 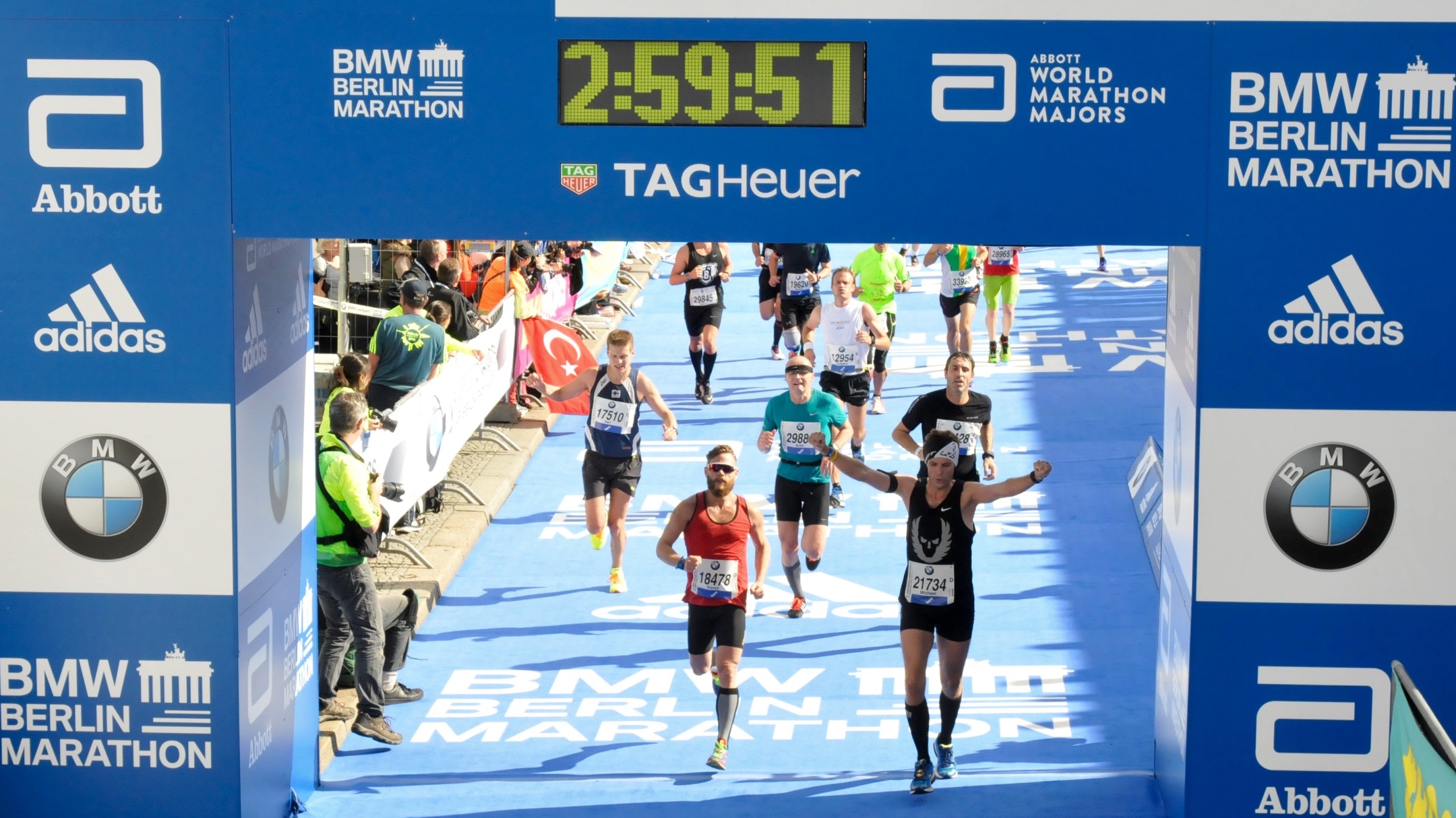 I collect my medal, a goodie bag and eat a banana whilst stretching. I check the time, there’s a moment to pause and reflect before grabbing a shower and heading to the airport. I start thinking about my next marathon…