After a DNF on the Thames Path 100 last month and a painful Achilles Heel injury causing me to pull out of last years North Down’s Way 100, I wasn’t quite sure exactly how I should be feeling about running the South Downs Way 100 miler.

I had managed to do only 2 recces, covering the first half of the course up to Amberley and with the exception of the area around Botolphs, I had no idea what the second half of the course had in store for me. I’m not sure if it’s the not knowing which kept me going, or whether knowing would’ve made it easier to get myself to the finish.

Conditions for the day were going to be favourable with a mostly cloudy and dry day with a breeze following us from behind. You couldn’t ask for better conditions really.

I headed down to my brother in Walton-on-Thames on Friday after work and we had a last meal of pizza washed down with some Erdinger Alkoholfrei for me before hitting the sack for a 03:45 alarm and 04:15 drive down to Winchester. Breakfast consisted of a few croissants consumed on the journey down, as I knew I wouldn’t want much else.

We made good time on the drive down and I went through race registration pretty efficiently, showing my mandatory kit and collecting my bib before a final loo break and race briefing. One final photo opportunity and it was time to get going.

I definitely felt the benefit of being out on these early part of the trails only weeks before, so they were still familiar to me, so I was able to run with confidence, knowing what was coming up and how I should be pacing myself. I was feeling confident but not cocky and had a loosely formulated plan which I was working to.

I had spent some time during the week making rice cakes, raw brownie bites and some sweet grits, which would keep me going for some time. Unfortunately after trying the first lot of brownie bites, I had realised I added too much salt and was terribly disappointed with having to ditch these at the second checkpoint, Queen Elizabeth Country Park. I still had quite enough food left until I was due to pick up more at the halfway checkpoint later on. I was making good time and left QECP about 4 hours into the race.

I did a regular 20mi check-in with my coach, Ben, so he could keep tabs with what is happening and Chris, so he could give me some support from a distance, whilst marching up the slope before eating a few strawberries and soldiering on. I tried some of the sweet grits which I had made. They tasted pretty good when I made them but then I decided to freeze them and, well, they turned all floury when they defrosted and disintegrated in my mouth. Not nice.

My backpack started to get lighter quickly, which wasn’t all bad, as Centurion put on quite a buffet full of tempting treats and things you wouldn’t normally associate with running like scotch eggs and sausage rolls. All tastes are catered for.

As I started to rely a bit more on the smorgasbord in front of me, I could tell instantly what was hitting the spot with me. Watermelon, the rare treat of strawberries, pineapple were all good favourites, then came peanut butter sandwiches and wraps (you should try them) and if there was a cakey treat like banana bread it was quickly devoured. These odd bits kept me going between rice cakes and I really couldn’t have wished for anything else. 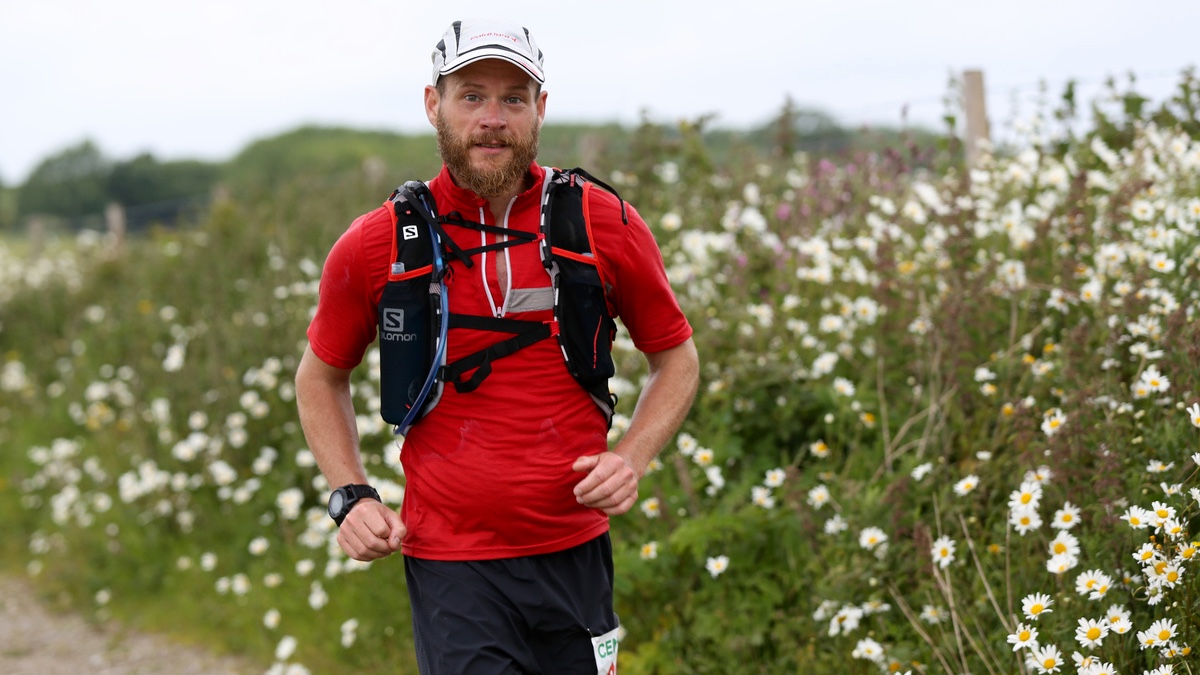 I’m not sure exactly when I first started to feel something go wrong. It was definitely after Bignor Hill, as I reached that in 8:20, which I thought was good timing for 42mi. Maybe it was the slope leading down to Amberley but by the time I reached Kithurst Hill, I knew it was going to be an interesting journey which lay ahead. My newly acquired shin splint in front of my leg, just above the ankle, was no longer a passing ache and I asked at the aid station if they had a spare leg, preferably right to see me to the finish. After tipping my socks and shoes out (there were remarks at how agile I was) I grabbed some melon and marched up the next slope. 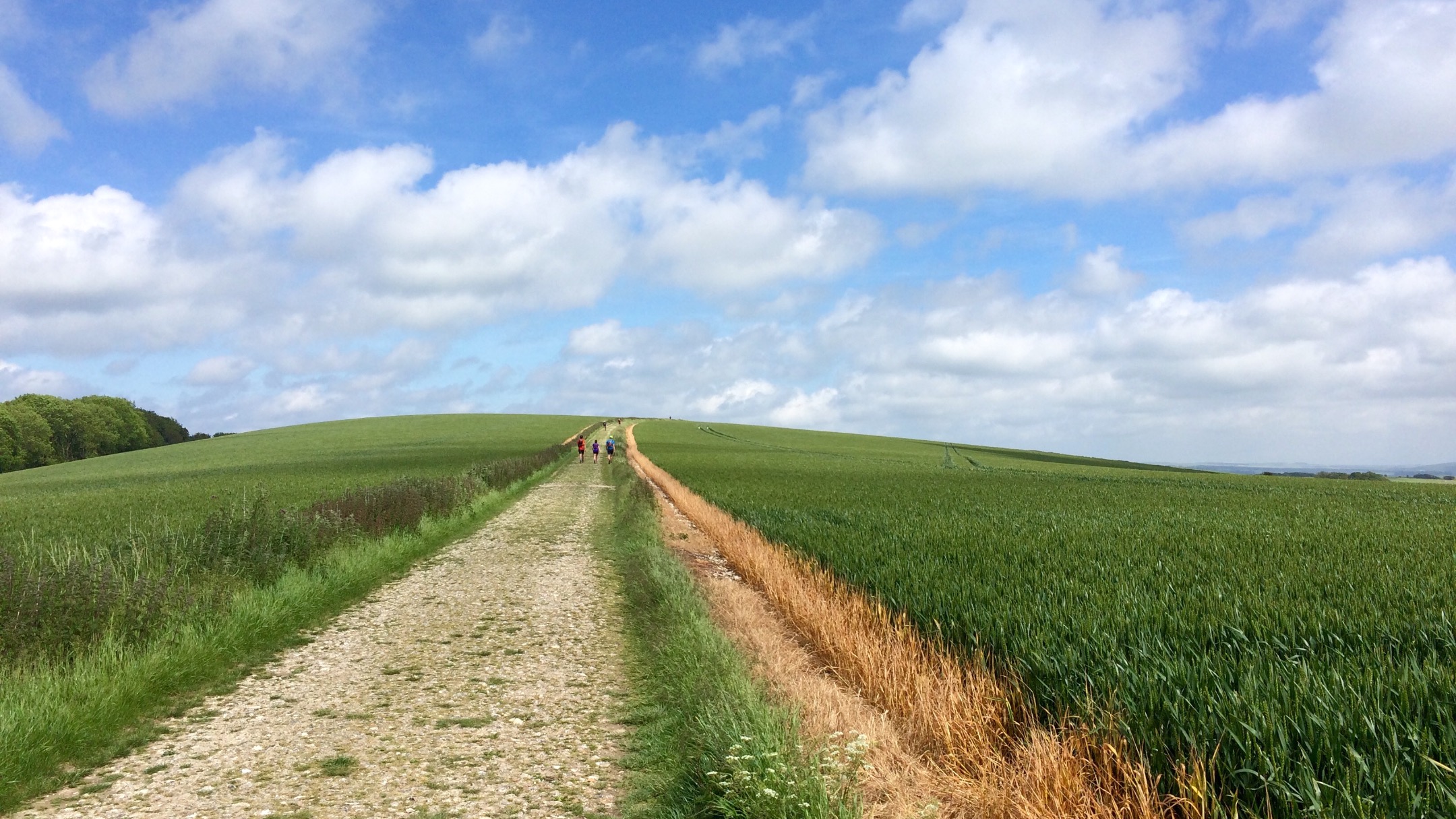 I had a bit of a moan to Ben about my shin but I was still running and other things like the odd stitch and shortness of breath came and went. I wasn’t at Washington very long, just time for a decent loo break, splash of water to the face and a good wash of hands before having some pasta, a cup of tea and a brownie and heading back out. I felt a certain determination to get to Botolphs before dark and not exactly knowing how long it would take me, I kept going.

It couldn’t have taken me too long but the climb out of Washington was pretty steep, yet the views from up top made it feel like it was all worth it. I knew the slope down to Botolphs from when I volunteered at last years SDW100 (I had a run between Botolph and the drop to Washington), so it was familiar ground again, so I just kept my legs turning over all the way to the aid station, reaching it in a decent time of 13:10.

It took me a further hour and a half to reach Saddlescombe Farm, just 6 miles further. My shin was hurting on the ups and the downs by this stage and being realistic, I asked Ben how long it would take me to walk the last 30 miles. It wasn’t so much about whether I’d make a certain cut off time but more about mental preparation for a very long walk through the night. 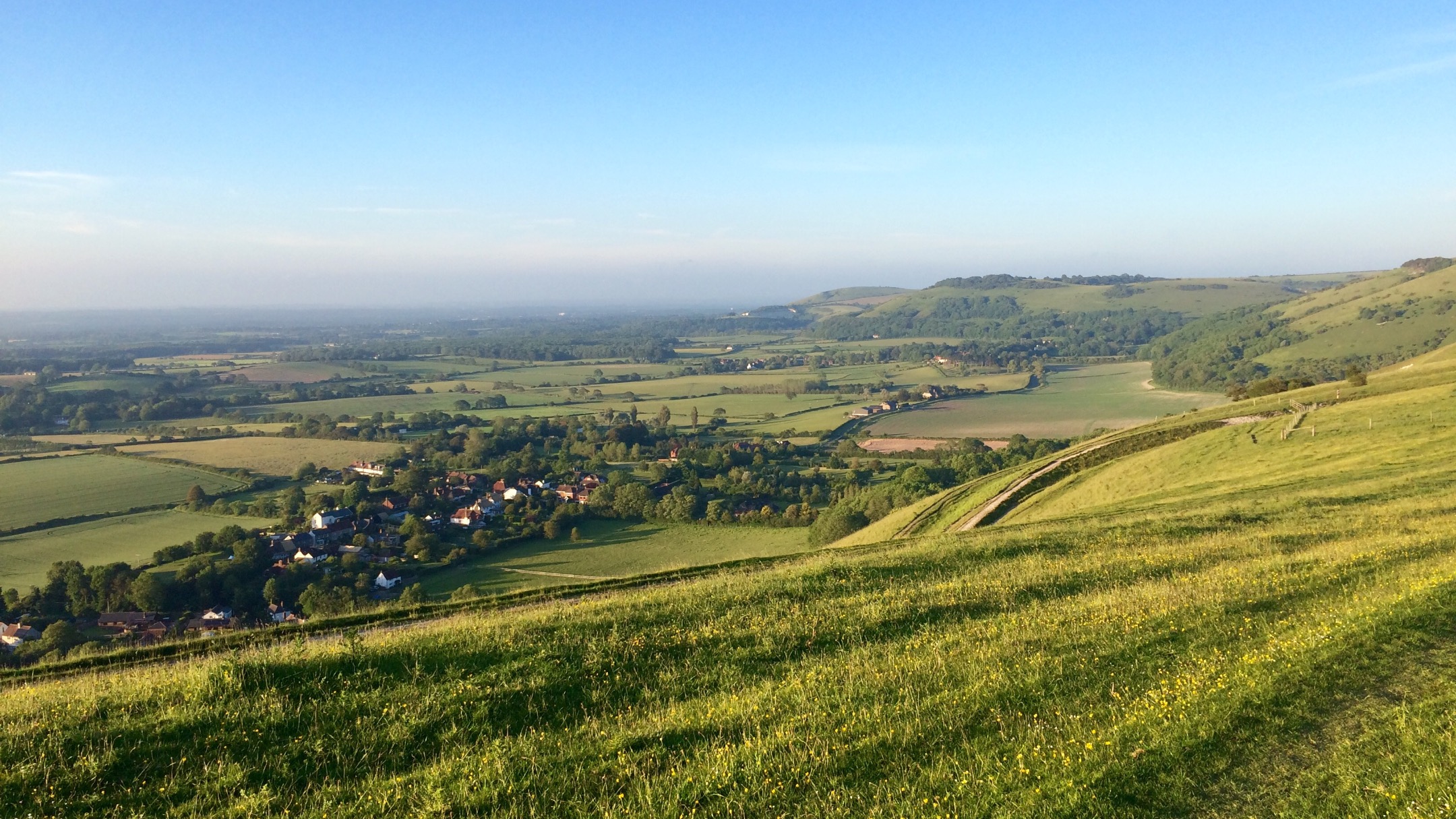 At Clayton Windmills someone mentioned if only I had Rocktape, to which a volunteer said they had some and cut me a piece so I could put it on. Instant relief, if only for a while to see me through to Housedean Farm, by which stage it had fallen off, as there was too much dry dirt on my legs for it to keep bonded to.

The trek (that’s the only way to describe it) between Housedean Farm and Southease seemed endless and relentless. The climb went on and on, and things took a little longer, not knowing where you were headed, looking out for the next bit of reflective tape. One of most calming things at this point was looking around and seeing a long winding line of the pools of light from everyones head torches stretching across the downs. Suddenly you didn’t feel so alone.

It was bitterly cold on the tops of those hills at night and I was thankful for a decent base layer and found myself zipping and unzipping my jacket throughout the night. It would’ve been a good idea to wear gloves, something I discounted when packing. Lesson learnt. By the time I reached Southease (84mi, 21:03 later), I was feeling pretty green and just wanted to puke. I just didn’t want anything. I don’t even think I managed to say hi to anyone at the aid station, just sat there for a bit, got up and went on. I regretted not topping up with water, although I was later worried about hyponatremia, as I started to swell, get fat fingers and needed to cock a leg every few yards.

Another epic walk between Southease and Alfriston lay ahead but it was starting to get lighter and it wasn't too long before I turned my head torch off and enjoyed the early light of a new day. I cursed the tricky drop into Alfriston, which would’ve been fine under normal conditions but I had figured out that walking sideways helped and I really didn’t care how silly it may have looked to passers by at this late stage. I stopped for a lovely hot lentil soup, some rice pudding and a few boiled potatoes. I was ready to pack it in but was convinced by one of the guys that I could manage the final two hills. It was the second cheeky chappy with far too much energy at that time of day reeling his mates in to the finish who gave me the final shove out the church and on to Jevington.

As the saying goes, nobody drops at Jevington, I wasn’t about to be shamed with breaking with tradition. Anyway, I was starting to feel a little perkier after some good food, so it was a quick greet and stop and I was back off for the final few miles to Eastbourne.

Little did I know about that final drop down from the trig beacon alongside Willingdon Golf Club and it’s probably best I didn’t as it was pretty steep but the point had come where I was just going to suck it up and go. I couldn’t do much better than power walk it down the narrow path but it gave me momentum to keep going all the way to Eastbourne Sports Park and the final lap on the track.

The moment I spotted the track I started to break into a jog and then ran, spotting Nici waving her arms at me. I had never been so pleased to see someone as I did in that moment. It had been a long hard night and I saw myself through it. I don’t know how I didn’t manage to cry but maybe all those tears that came before had dried my eyes. 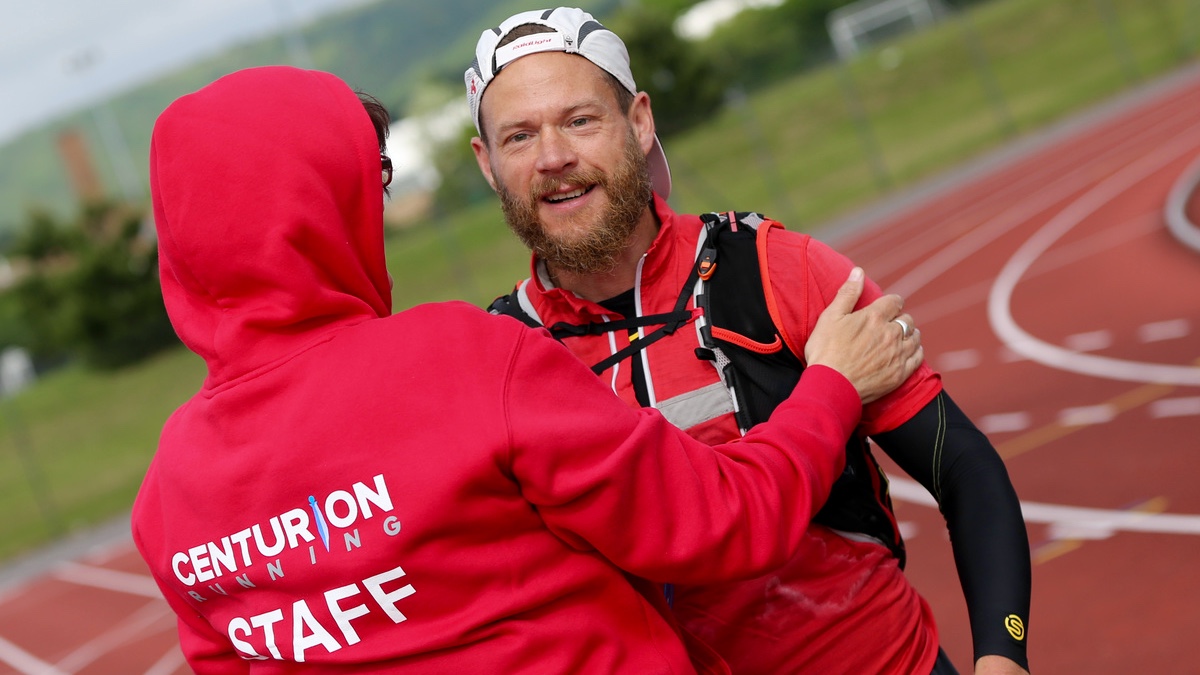 After a much deserved hug I sat back for a while just taking the moment in, teary eyed. I was remembering those dark hours where I had cleared my diary of 100mi races for this year and that I had planned to go back to Ben with a plan to attack a few 50mi races first and build a base up to another 100mi race.

That all changed after I crossed that finish line. Just knowing what you’re actually capable of when everything is stacked against you made me realise that there’s so much more to running a 100mi race than the time you finished in. There are so many unknowns that you can’t predict and it’s what you decide to do when adversity strikes which gives you strength.

If I knew then what I know now, I would still be standing at the start of the SDW100.