Where does one begin after such an epic adventure. The days after running a race like this, you try and piece things back together, as all your thoughts and memories of the day out running one hundred miles blur. So I sit here, map to hand, trying to remember what actually happened this past weekend…

With my kitbag packed on Thursday evening and a few extra things thrown in for good measure, I went to work on Friday and stayed at my brother’s that evening. I can’t recall being nervous or excited, I think I was mostly concentrating on having dinner and packing things ready for the morning, as my alarm was due to go off at around 04:15.

I snacked on some croissants in the car while my brother navigated a diversion which didn’t make sense on the A3 and we managed to make it to Farnham just in time for kit check and a quick catch up with Ben, Russ and Alice, who were going to be my crew for the race. A quick photo opportunity later and it was time to run! 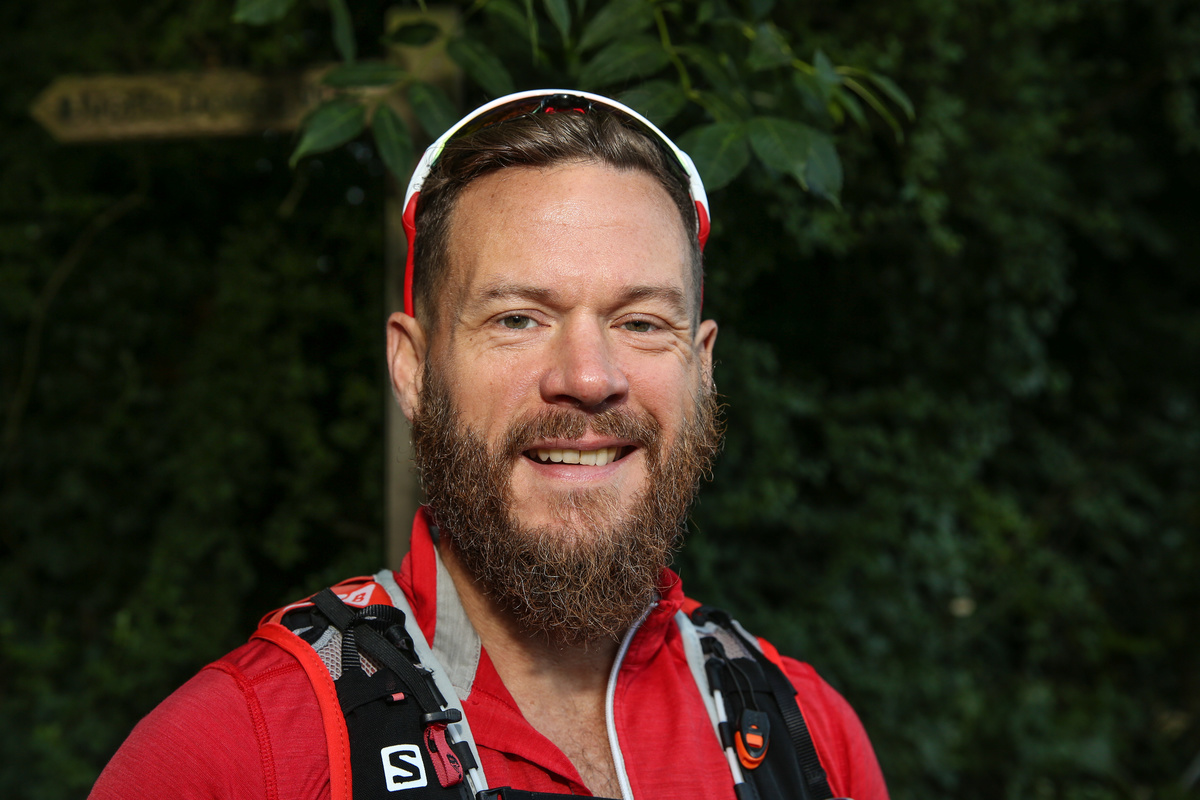 I had done a recce of the route previously and had also attempted to run the North Downs Way 100 last year, making it to Wrotham after suffering with Achilles tendinitis, something I’ve never experienced before and hopefully never again.

The start was fairly relaxed, there’s not much point trying to push past other participants, with plenty of opportunity to take in the scenery and before I knew it, I was running straight through Puttenham and heading on to meet my crew at Shalford Park. After a few questions and some refuelling, I was off. I was feeling positive but not cocky.

After running along what seemed a long stretch across the front of Hackhurst and White Downs, I saw my crew again at Ranmore Common for some more rice cakes, drinks and a change from my ashmei short sleeve running jersey to vest before heading on to Box Hill, where I grabbed some watermelon and strawberries before soldiering up those seemingly endless steps, giving little thought to the climbs we’d experience later on. 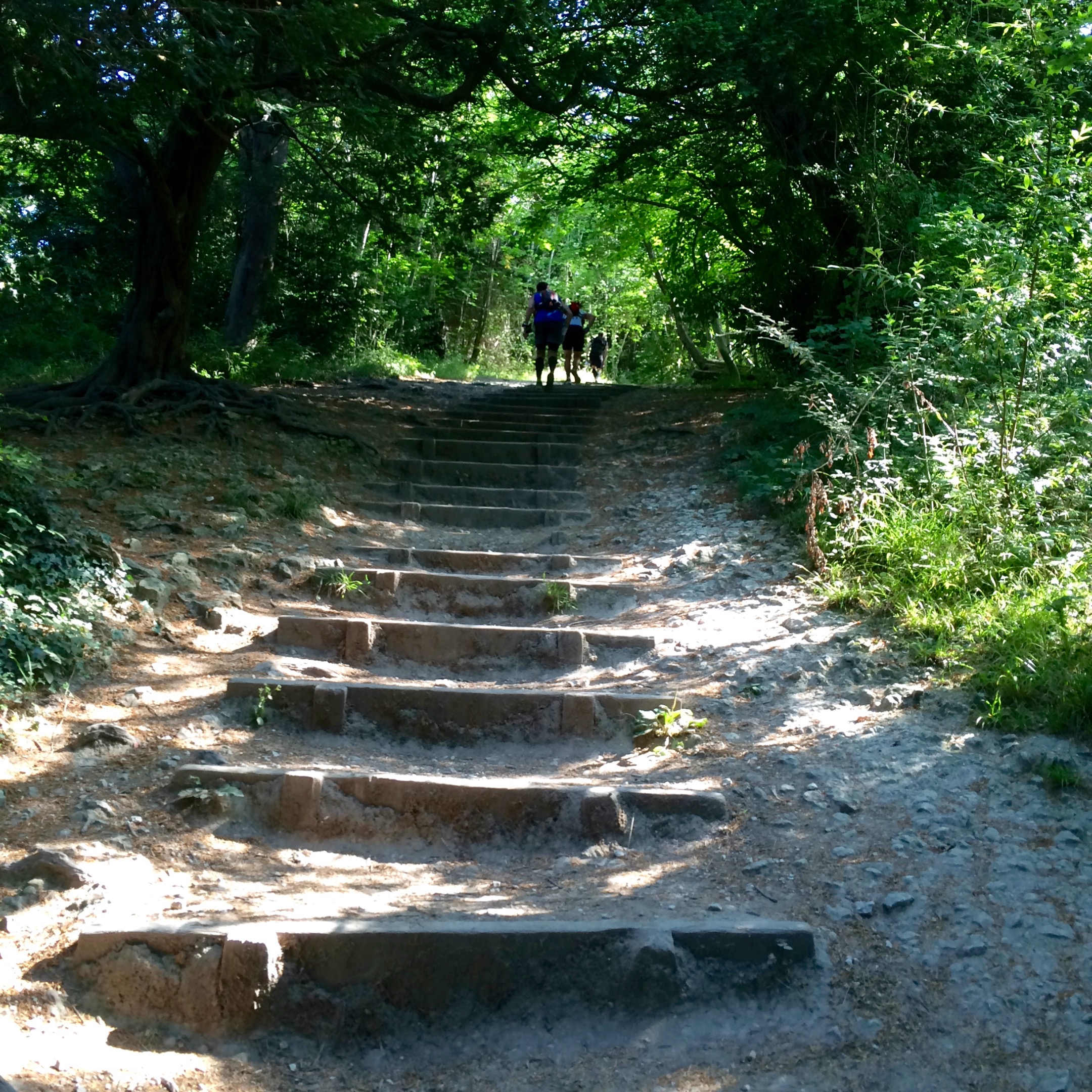 The day was warming up and I was glad for the change of clothes, as it felt like I was breathing in soupy air, it was so thick with moisture and warm, even though it wasn’t a particularly hot day compared to my recent week of running at the Al-Andalus Ultimate Trail last month.

I remember approaching Reigate Hill wondering “if this was this hill where…” which started to become a repeating pattern, trying to recall a buzzfeed styled “what happens next”, counting down all the hills of the North Downs in my memory one by one until only a handful would be left during the dark hours. Reigate was the steep climb with a left then a right and a nice long meander before popping out of the trees to cross a bridge and straight into a tea-room. Not the hill I was thinking of at the time. That would be much later.

After Reigate there was time for a gentle run to Merstham, then across over the M25 and under the M23 where a long line of us snaked up through fields, too steep to run but for farming. After a quick stop in Caterham to top up water and get some more watermelon (the weather was perfect for this luxury), we crossed the A22 and headed back under the canopy of the forest along to Gangers Hill, where I managed to forget a water bottle but my crew found it and returned it to me at Knockholt Pound. I was really worried that even though I had spare bottles, 500ml would not be sufficient to see me through the 10km from Botley Hill to Knockholt Pound but I managed quite well without dehydrating.

Alice told me to stop walking and start running when I left Knockholt with a belly full of pasta, so her penance was to run with me between Otford and Wrotham. It was a great distraction having some company at this stage as we headed into early evening and the trails were easily navigable. It was also excellent having Chris join in from Otford, although I was only expecting to see his beardy face much later that evening. We were in Wrotham in no time at all and Alice’s “are we there yet?” amused me. 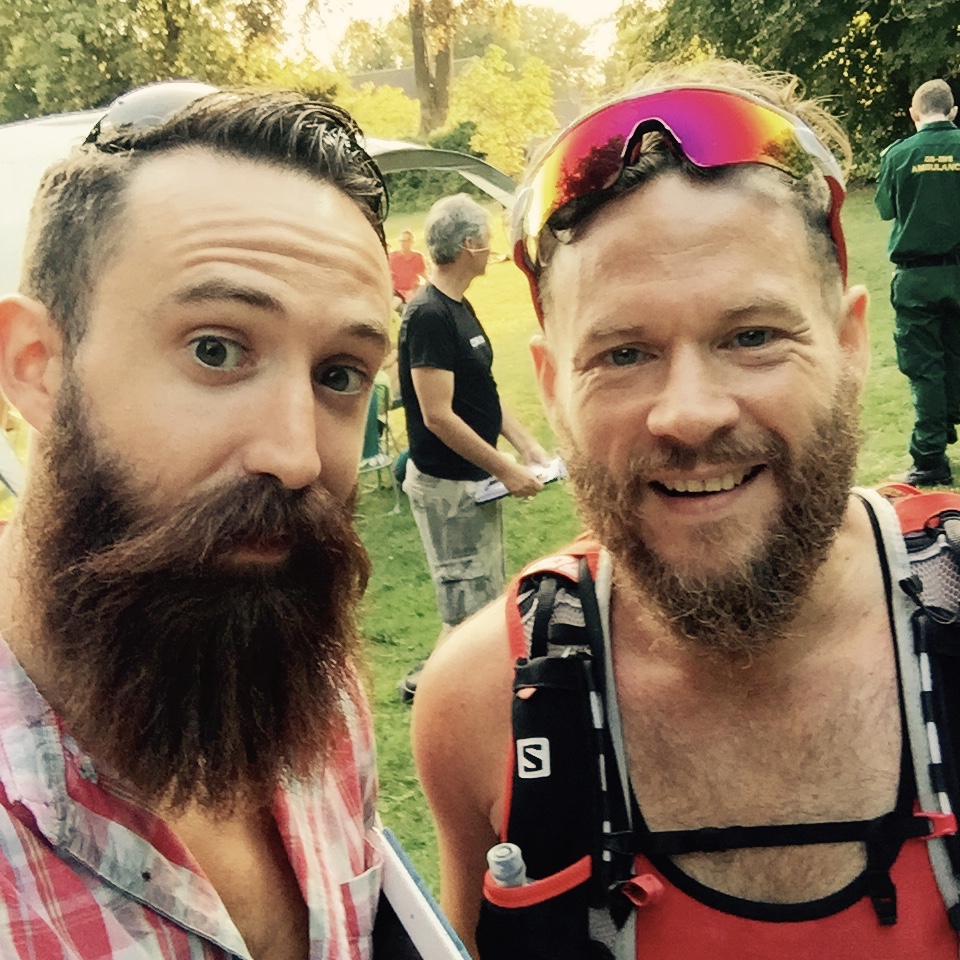 After briefly chatting to another runner on the way out of Wrotham, who I’d later cross the Medway Bridge with, I had a quick stop in at Holly Hill, having a quick cup of tea and moving on. Some other runners had decided to sit in the chairs of doom for a moment, something I was not going to even consider, as it may have been harder to stand back up than the comfort of a seat was worth.

Running 100 miles is never by any stretch of the imagination easy but things were about to become challenging at this point. I had reached Great Buckland at dusk and passed through the prettiest field of wildflowers and sunflowers. Quite a sight in the setting sun, they had already turned their heads back to catch the sunrise to come. I didn’t stop to take a photo regretfully, however I wasn’t feeling good and didn’t want to have anything sweet, or anything else for that matter.

Ben managed to make me have a SiS Double Espresso gel and Russ pushed me out the checkpoint with a couple of slices of chicken and bacon after I had a brief chat with Steve who I met at Al-Andalus Ultimate Trail. I don’t think I could’ve managed anything more and by the time I was ready to run across the Medway bridge, my tummy had settled.

The climb up Bluebell Hill was a long one and at this stage we walked most of it. My Garmin fenix 2 gave up the ghost at this point, deciding to restart and wanting to continue my Trail Run as a Cycle. This will be the second time they replace my fenix 2, something I really didn’t expect from a premium Garmin product. From this point on, it was going to be run by feel and gauge the distance covered between checkpoints.

By the time I reached Detling my legs were feeling weary and Russ came along with my ashmei compression socks. I had not worn them yet and they felt like they may have been a size too small when putting them on but they gave me a fresh set of legs at midnight, when I needed it most. After some caffeine and a little more pasta, I went back out into the darkness.

When I did a recce of the North Downs, it was this point I missed the left turn into the hills, so the stairs at Detling were new to me. Up, up, down and up some more. This went on after crossing a field, then another. At one point I came down a set of stairs too fast and took a tumble. Nothing too serious, only the pain of breaking the fall with my hands to distract me from pain elsewhere for a while.

From this point on things were a bit of a blur. More so than piecing things together from earlier on in the day. At this stage it was about getting to the finish. Pulling myself together when tiredness wanted to take control and only stopping for a cup of tea or coffee and marching on with a paper cup in my hand and my head torch lighting up the path ahead.

I vividly remember passing some people walking the North Downs in the opposite direction thinking what crazy people would be out here at this time of night… Oh, yeah. Then there were the odd sounds that were not of the forest. Probably some mind games or something to keep me moving when I heard a noise beyond the beam of my head torch when looking behind. Not a mouse, badger or deer, so we move a little quicker.

Lenham became Charing and Charing eventually became Dunn Street, where it was just light enough to switch off my flickering head torch again. I managed one final cup of coffee and tried to eat a handful of nuts but ended up spitting them out, my body deciding “no more”. With me and my cup of coffee over the stile and into the field, this was one last push towards my crew in Broughton Lees and without really stopping because I just wanted to be done, I pushed on to Wye. 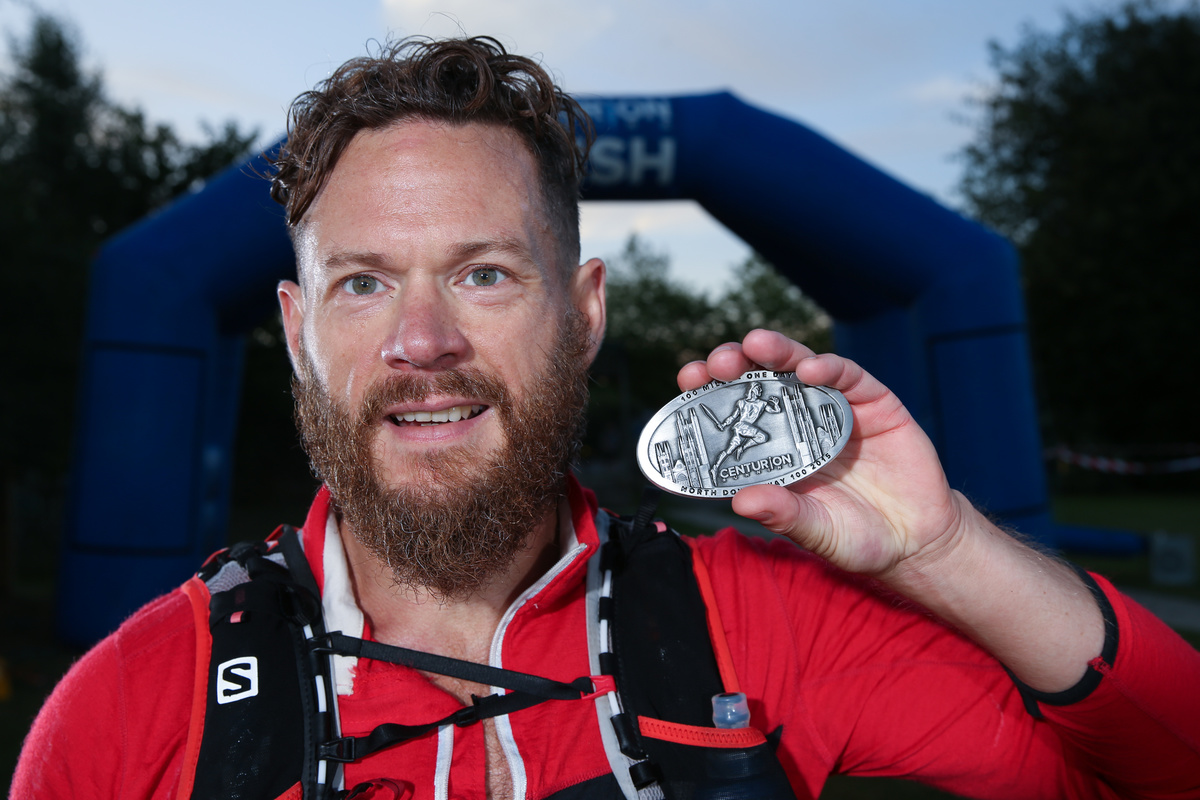 Crossing the finish line in 23:42:22 was more of a relief than anything else, with a sense of giving every last bit of myself during those last moments. Fighting back tiredness, the mind willing you to stop for just a moment and your body refusing to let you eat any more solids, I was quite literally running on empty and willing myself to the finish with words of encouragement from my crew.

People often ask if you’d do it again and for a brief moment after a race like this you may think that you’re done but you never are. Like a moth to a flame, we’re drawn in to experience something we know will hurt every part of our being and make us question why but it’s something we just can’t resist. There’s no point in trying to make logic out of something which seems illogical.

Being relatively new to ultra running, I don’t see myself as one of the more seasoned ultra runners. I see myself as someone who loves the silence and solitude of running long distances, often not crossing paths with anyone. But then maybe that’s who ultra runners are and what brings us together are moments like these and we cross the finish line feeling something familiar, a sense of belonging.

I owe so much to Chris who is used to me slipping away from home in the early hours to swim, cycle and run, to Ben for having the patience to be my coach, for Russ being spot on with nutrition and Alice for managing to be as enthusiastic with only 5 miles to go as at the start.