Back in April, Transport for London (TfL) broke ground with the works for the new segregated Cycle Superhighway 2 (CS2). Now, a very long 6 months later, after what initially seemed like good progress, things seem to have ground to a halt.

To give TfL credit, this may not be entirely true, however it certainly does seem to be the case, as they have effectively rendered the whole of CS2 between Aldgate and Bow unsuitable for cycling, with the exception of what little road they haven't started works on yet.

So this is my commute on a daily basis in pictures (I know a few people who would be terrified if they saw footage of me cycling) at the spots where I wonder what the engineers were thinking when designing the new segregated cycle lane. 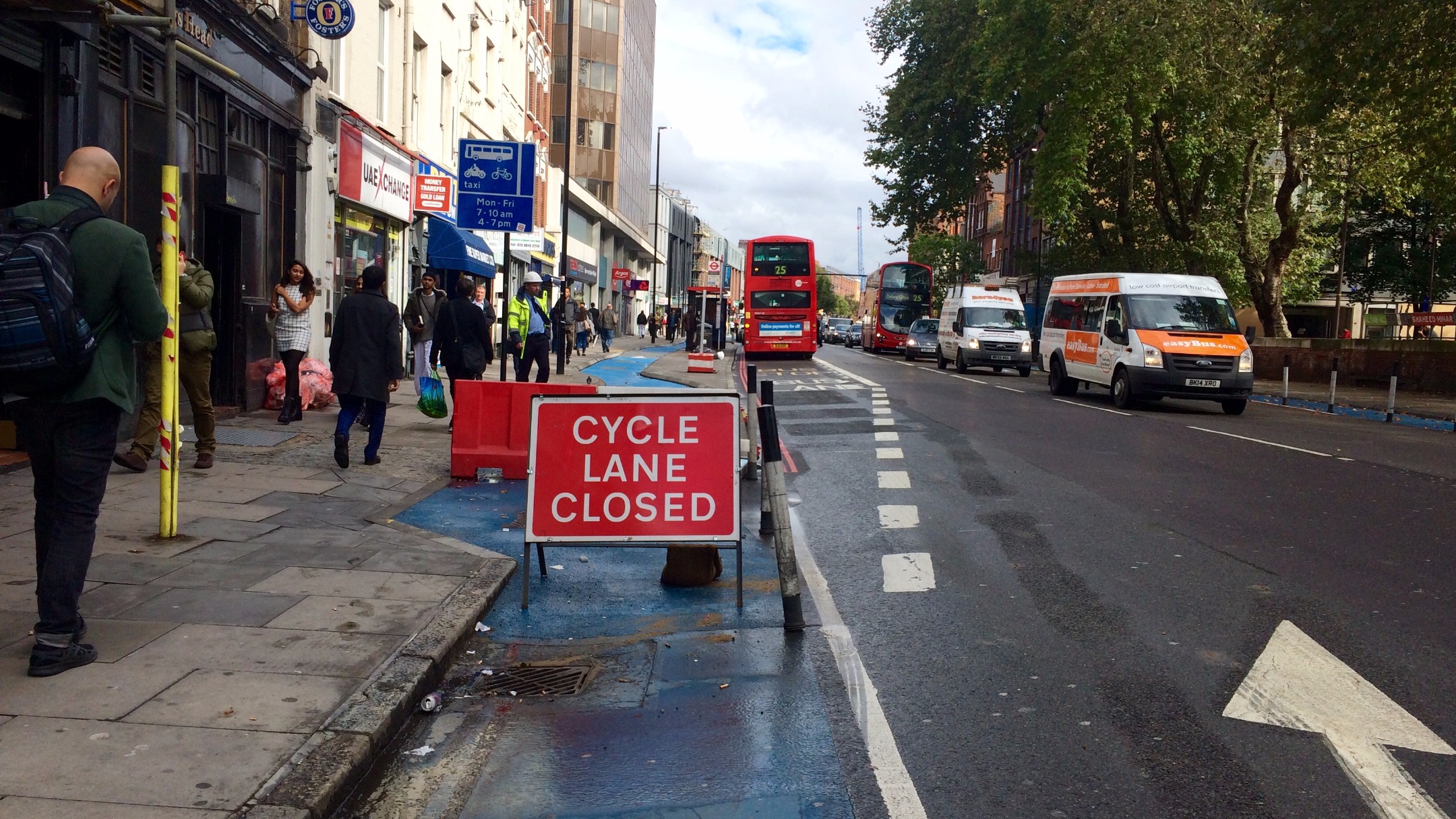 This is effectively the "start" of CS2. It's outside the front of a Ladbrokes and most evenings a silver van blocks access to the lane in any event. I haven't managed to figure out why they didn't level the gully with the road. 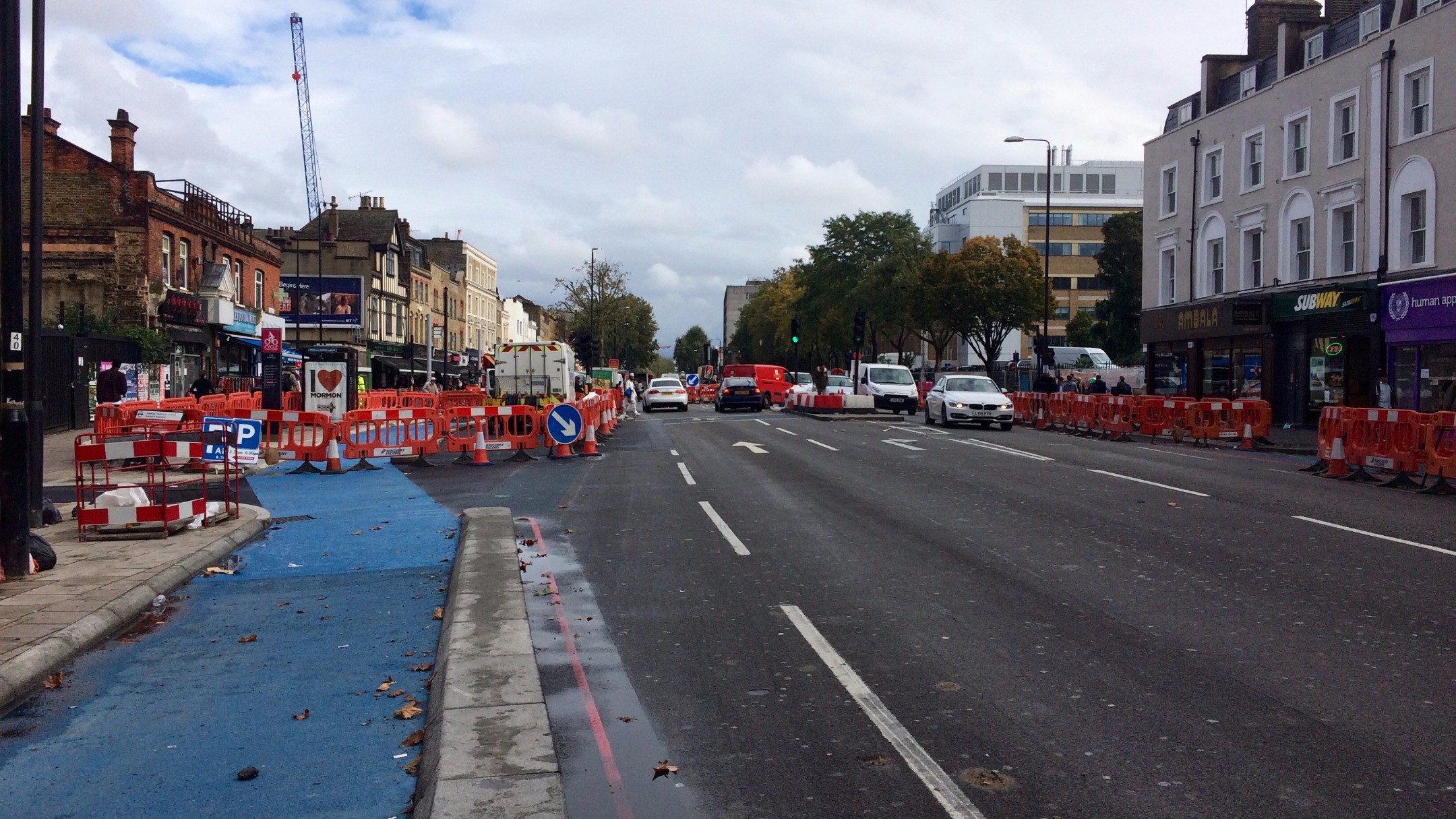 There's a lovely long section of segregated lane before this intersection at Vallence Rd by the Royal London, which is nearing completion in becoming a "superjunction". 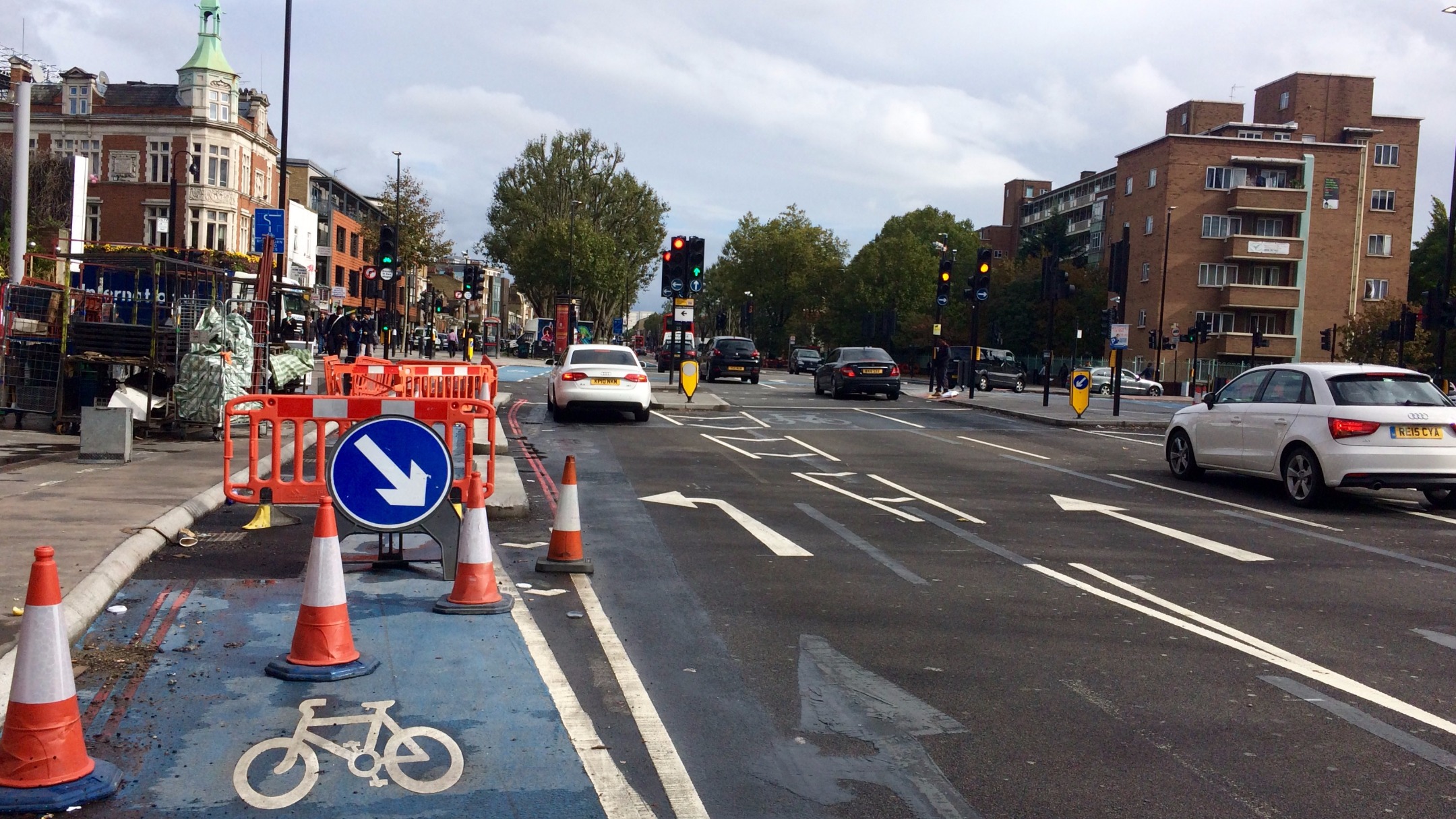 This is the recently opened superjuction at Cambridge Heath Rd, just the other side of the Royal London. It seems we will not be having a segregated lane between the two, for some unfathomable reason. It didn't take long for this piece of cycle lane to close too, after the fanfare of its grand opening had died down. 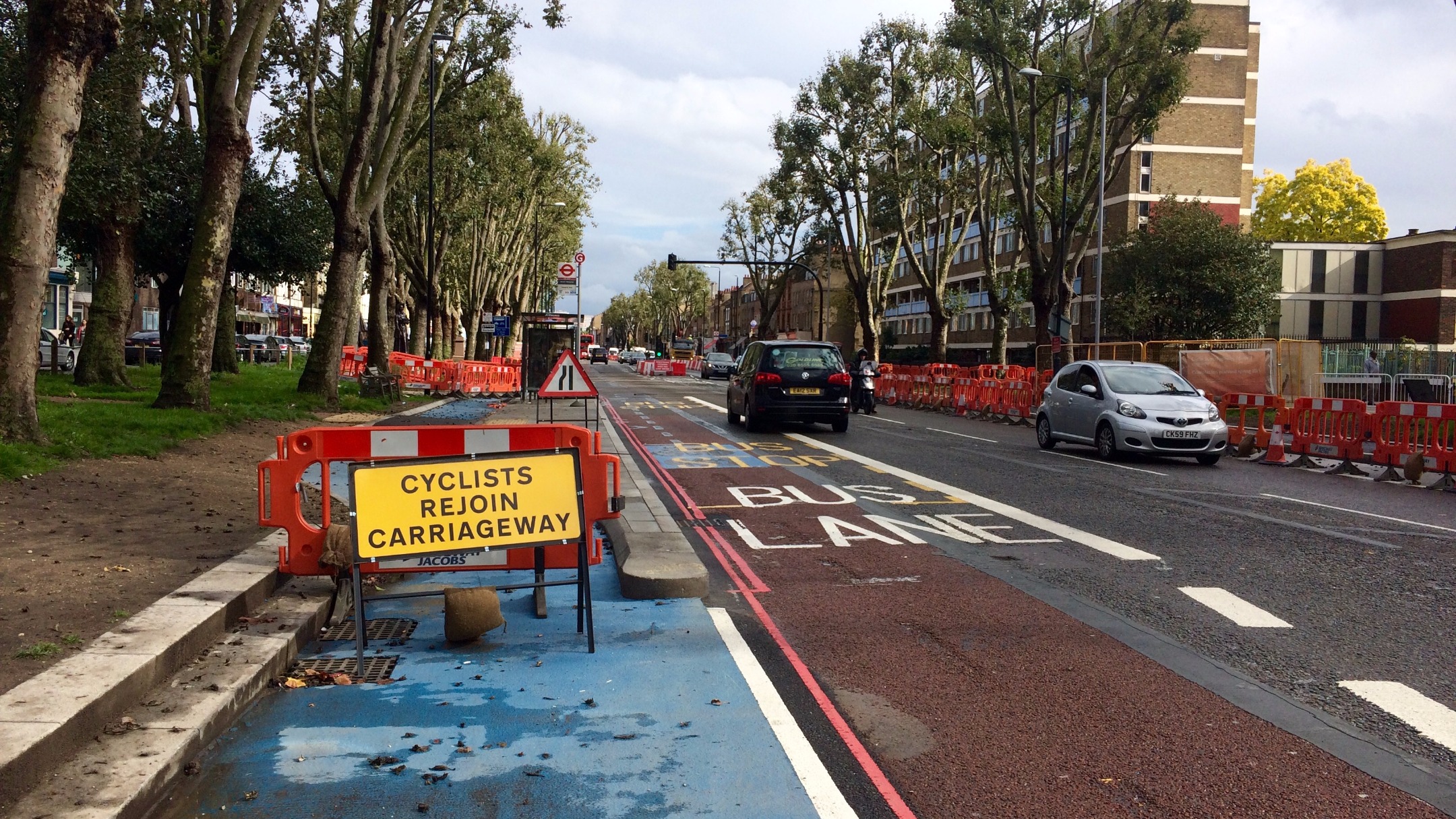 This bus stop bypass was an open and shut case. I'm not even sure it was open longer than a week, although I stand to be corrected. Maybe two weeks. 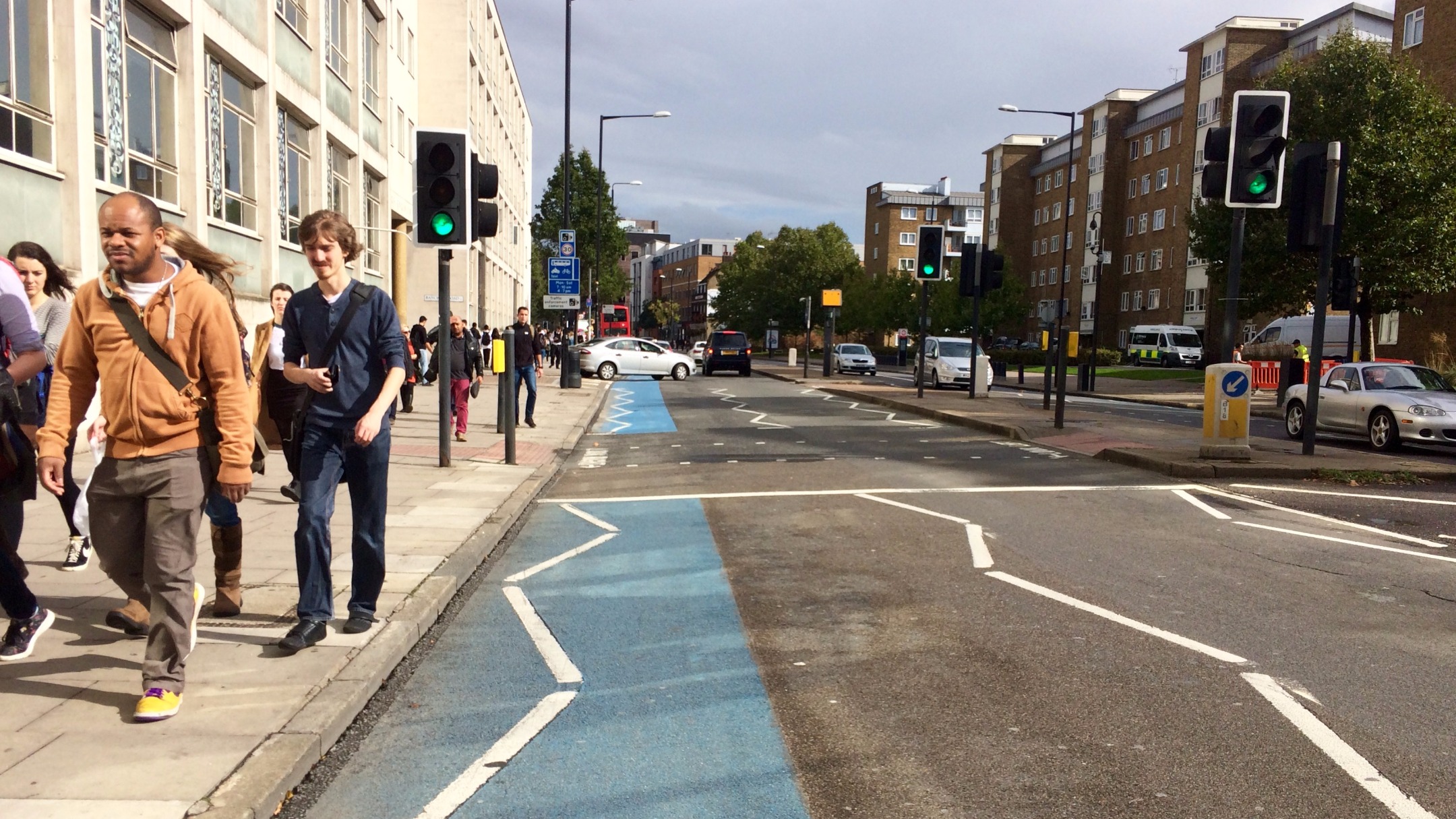 This must be one of my favourite sections of the CS2, mainly because they haven't messed with it yet. There's still time and I think they'll be getting to work on it in the not too distant future. 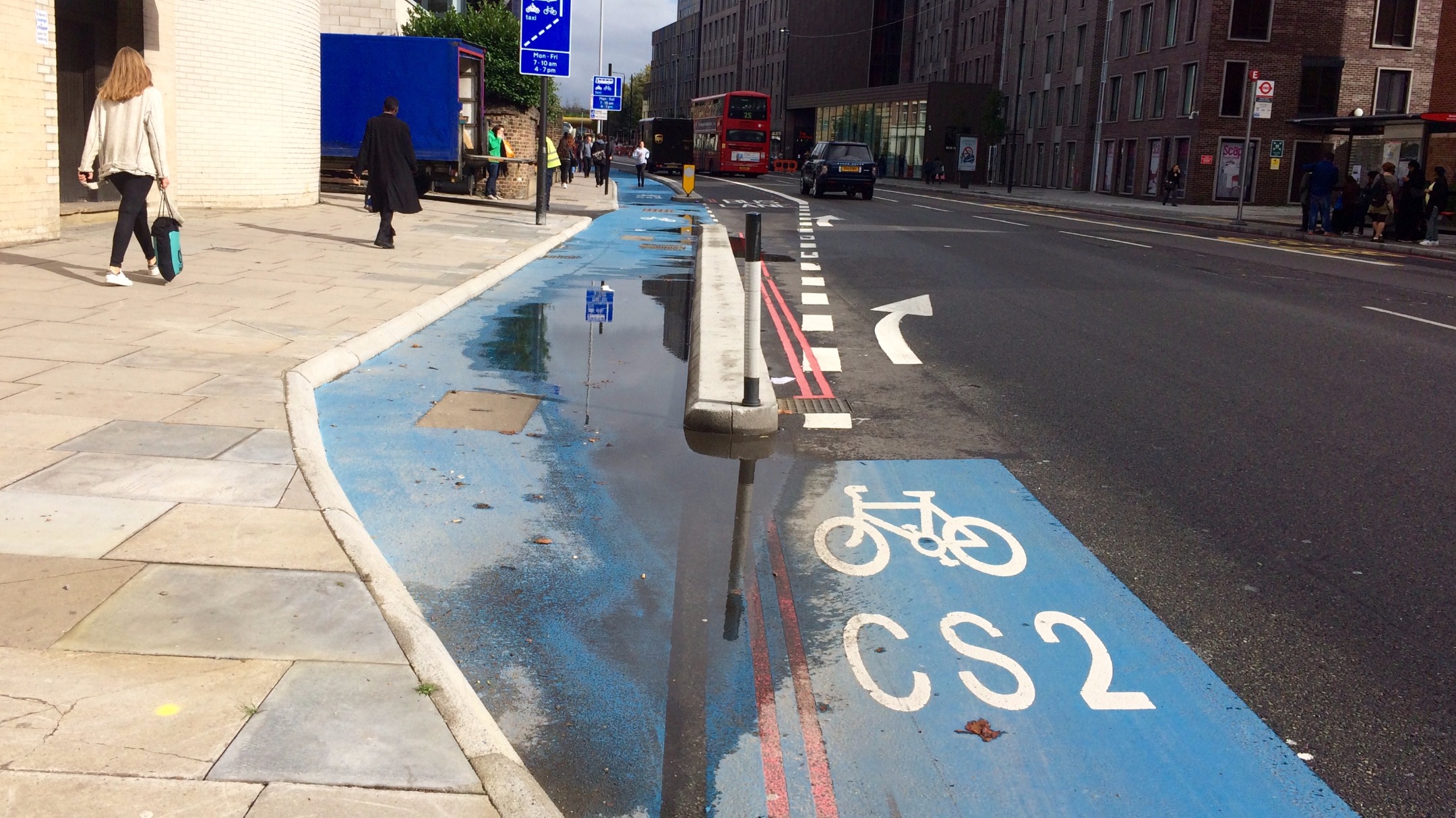 Prone to flooding... This is an example of what flooding looks like on a dry day. Little thought has been given to drainage, which isn't great, as cyclists don't really like getting any more wet than we have to already. Shoes can take a while to dry. Spot the gulley on the other side of the kerb? 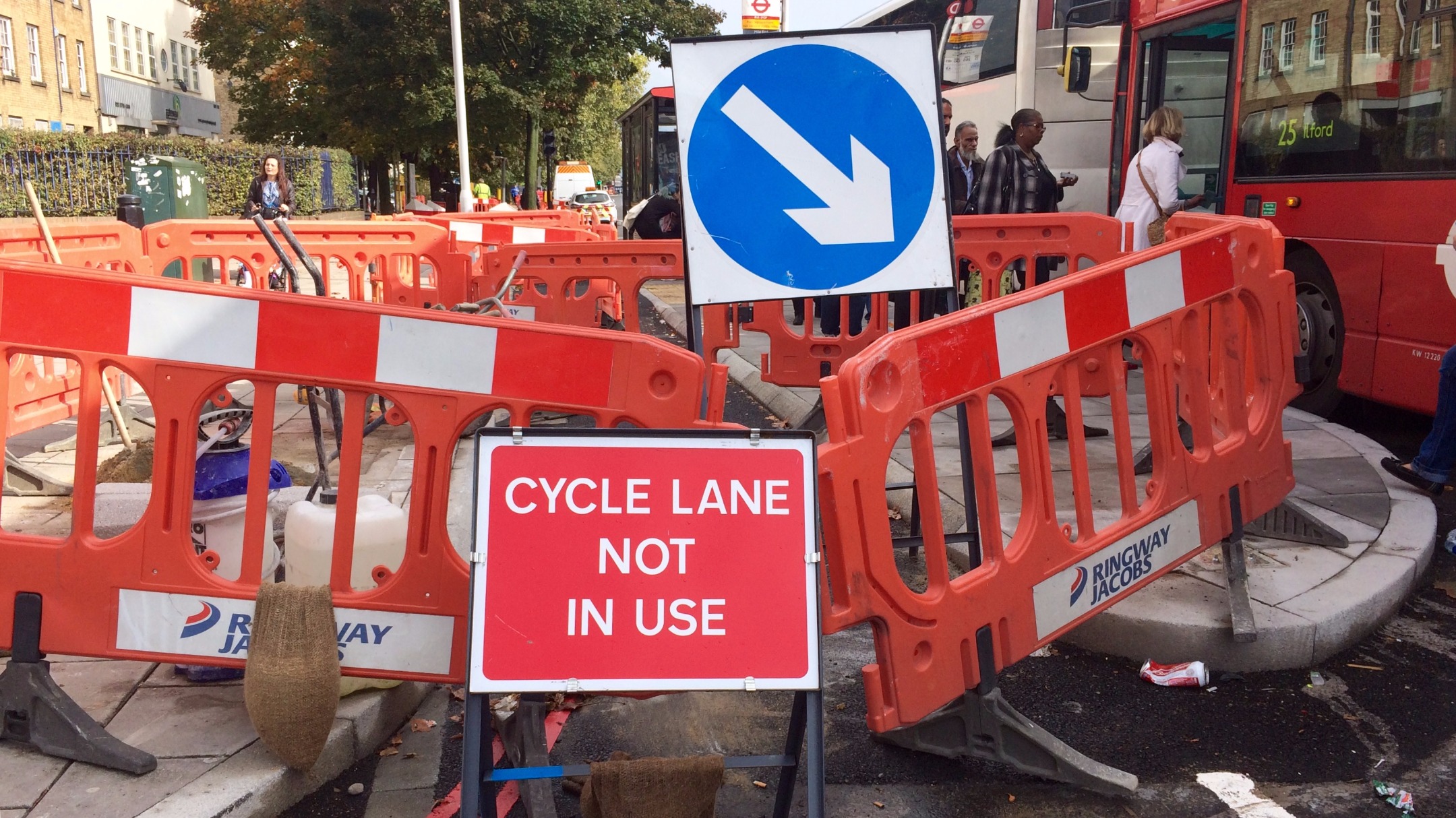 Well, I'm speechless as to what is going on here. Maybe they had a lot of spare panels. 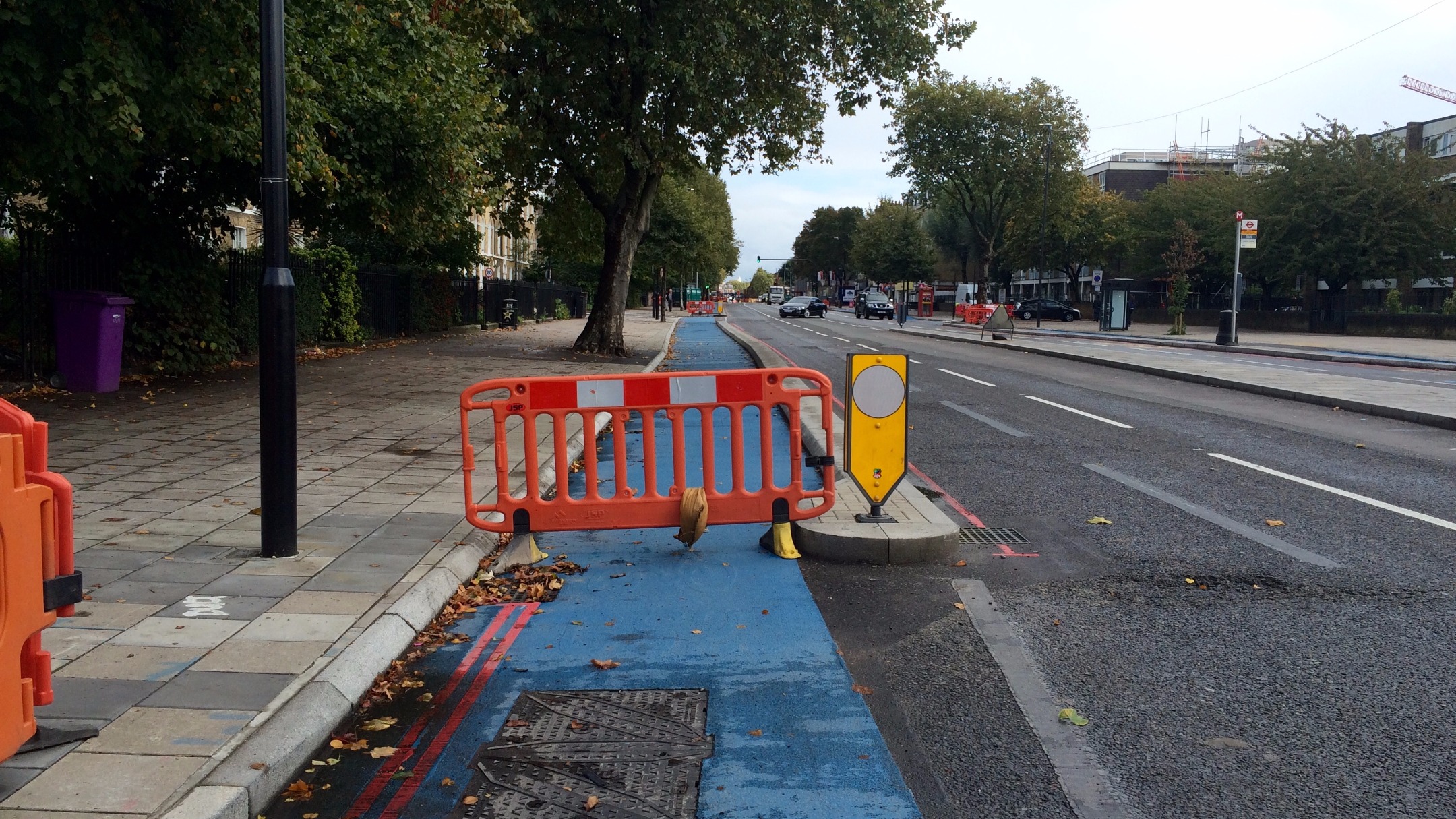 Closed for no apparent reason. This is between Mile End and Bow Rd stations. This section is level with the road, the next is raised (not sure why). Both are closed though. 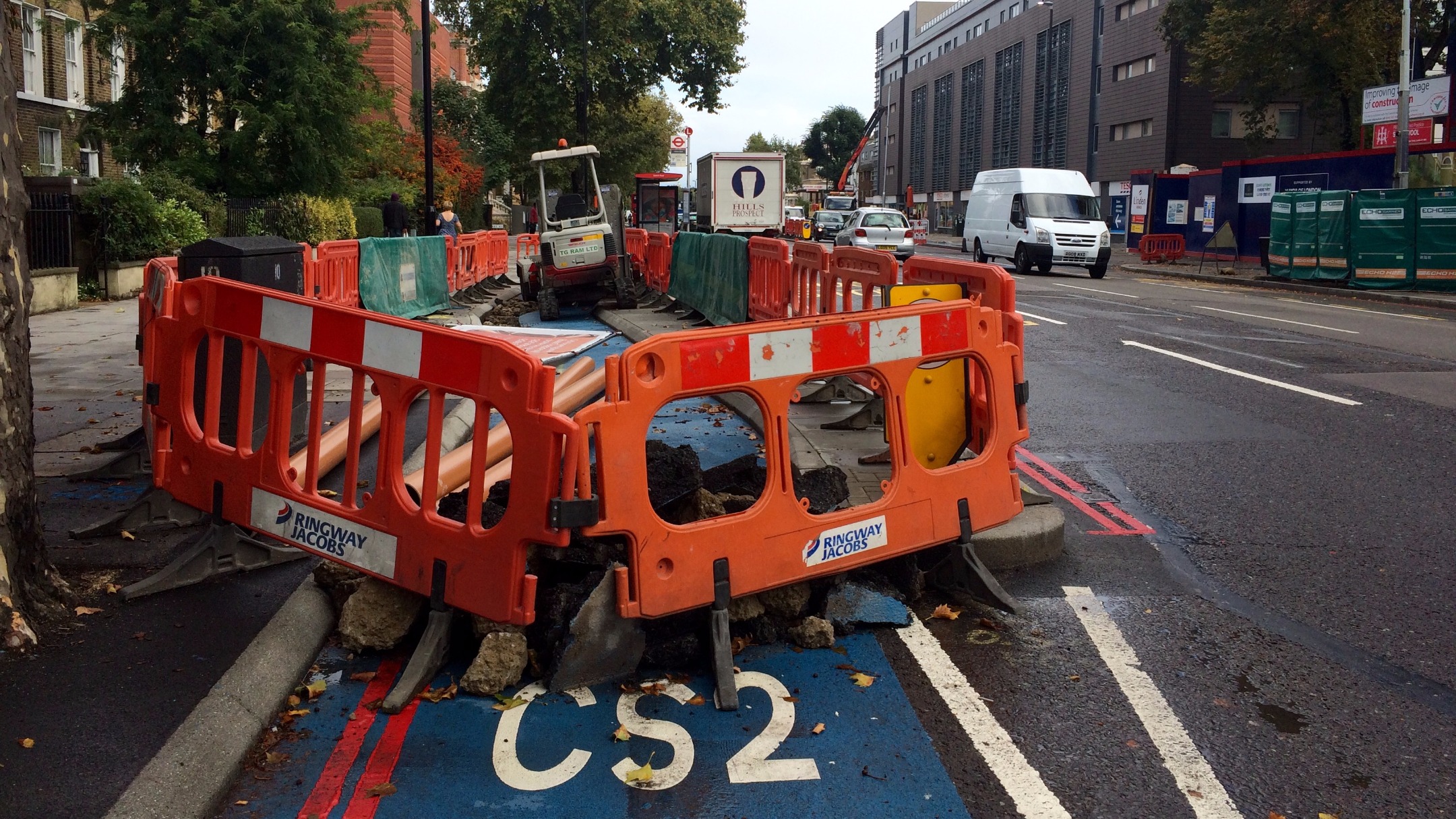 This bus stop bypass is a little snug, so most cyclists stick to the road to pass it. I think they've decided to widen it by an inch or two. This is a case where and inch certainly won't make a difference. 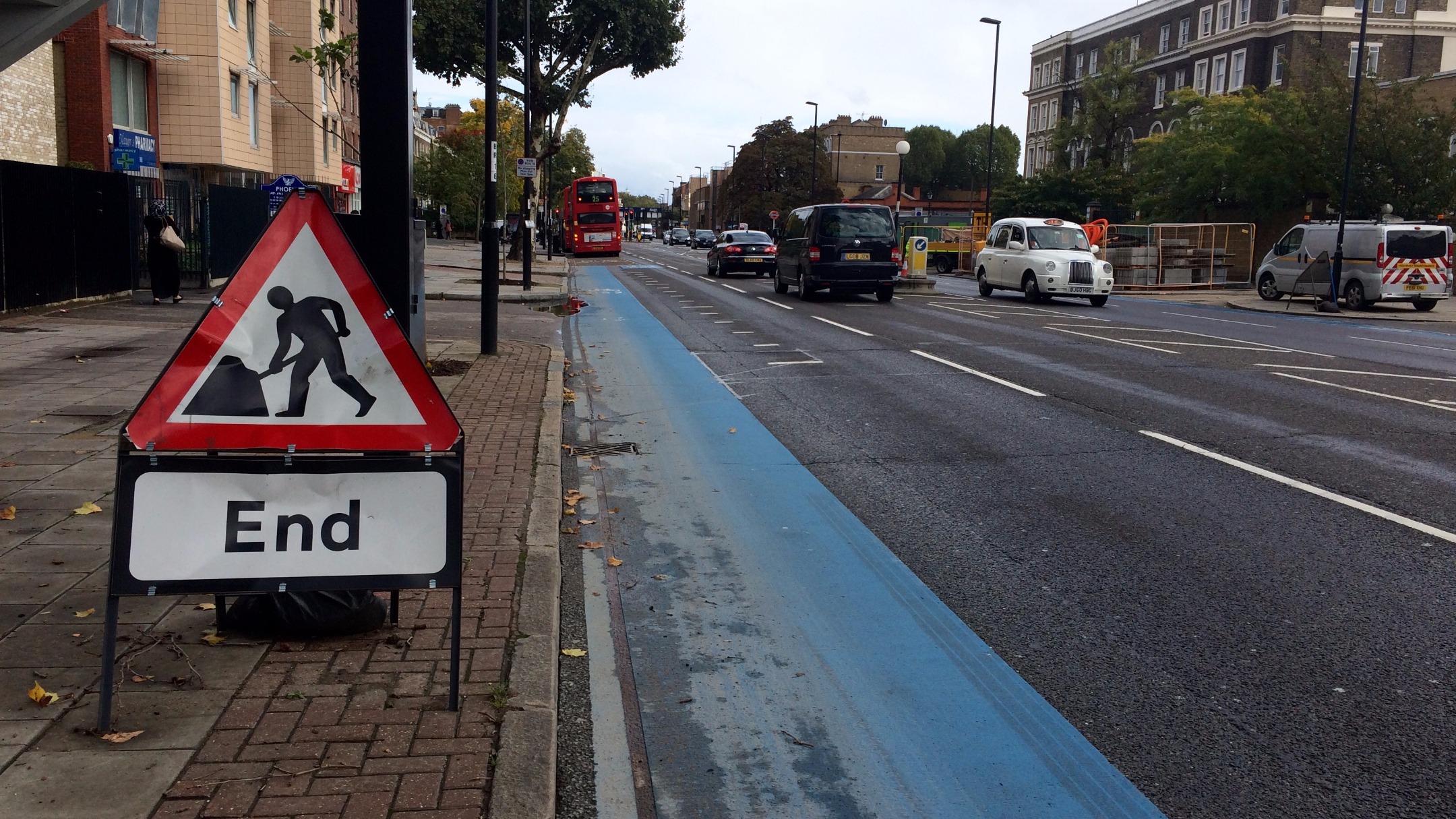 Finally, the last little stretch on my way home before Bow Roundabout. This was the last bit which has been untouched by engineers. That's all set to change now, as they're currently moving in.

What I don't understand is why they don't concentrate on having one or two sections of the new segregated CS2 operating properly before ripping up yet another section. Not only does this increase the demand on the flow of traffic down this road, it's becoming increasingly dangerous for cyclists who use it as a main throughfare to Central London.